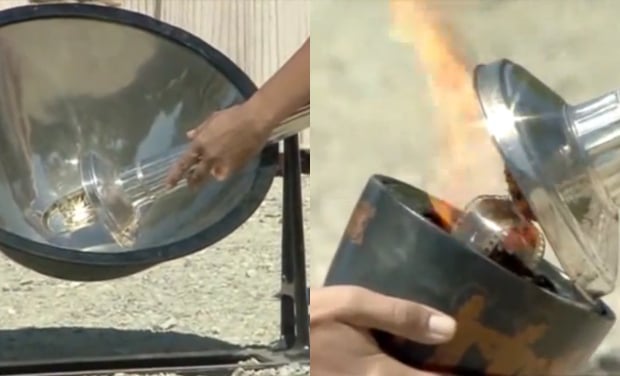 Every two years, the lighting of the Olympic Flame amidst the ruins of the Temple of Hera is a pretty interesting performance. The torch is lit from the light of the Sun, using a parabolic mirror to focus the Sun’s rays on the fuel in the torch and set it ablaze… but what exactly is that fuel? By the looks of it, at least a small part is a piece of 35mm film.

This was pointed out to us by photographer Tom Waugh, who noticed it while watching the official lighting of the Sochi Olympic flame on television. When the camera zoomed in to the torch being lit, he was very surprised to see what looked like film being used as the accelerant.

The ceremony itself involves actresses dressed as priestesses of the Temple of Hera. They go through a whole performance and invocation, after which the high priestess lights the flame using the Sun, passing it to another priestess holding a fire pot who, ultimately, uses it to light the first runner’s torch.

A bit of research on the Internet yields no information about film being used, but if you look up footage of the ceremony it looks like a piece of 35mm has been helping get the flame going for a while now. And, in a way, it makes sense: nitrate-based cellulose film is extremely flammable after all.

Then again, we’re pretty sure (like 99%) the Greeks didn’t have any type of 35mm film at their disposal back in the day. Take a look at the footage for yourself and let us know what you think in the comments down below, and if you want to see the whole 27-minute ceremony, you can do so here.

Rumor: Nikon to Announce a Retro-Styled Full-Frame in the Next Three Weeks