Nothing starts your weekend off on the right foot like an epic time-lapse, and that’s exactly what we have for you here. Put together by an astronomy grad student at the University of Hawaii, this beautiful film captures the goings on at the Mauna Kea Observatories, one of the best places to study astronomy (and take some stunning astrophotography) in the Northern Hemisphere.

The student’s name is Sean Goebel, and it’s the fact that he’s a student that allowed him such great access to the observatories at the summit of The Big Island’s Mauna Kea, almost 14,000ft up.

Goebel says the location is “the premiere site for astronomy in the Northern Hemisphere,” in large part thanks to its dark skies, low humidity and the fact that it sits above much of the water vapor in the atmosphere. So what better place to capture an amazing time-lapse? 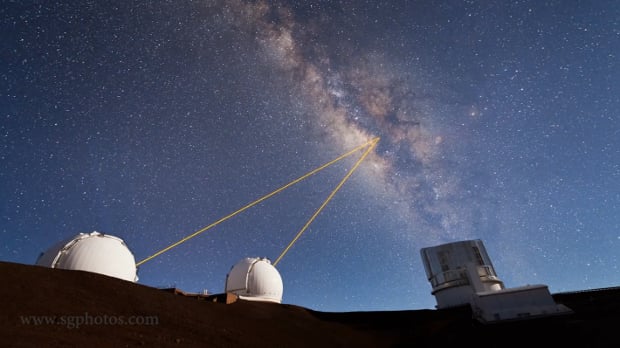 As you can see though, this isn’t just a time-lapse of the night sky or some telescopes, this has lasers too! And thanks to Goebel, who kindly put together an FAQ about the time-lapse, we now know what those are about… and no, they’re not Photoshopped in:

[The lasers] are used for adaptive optics. Just as waves of heat coming off pavement blur out the detail in faraway objects, winds in the atmosphere blur out fine detail in the stars/galaxies/whatever is being observed. This is the reason that stars twinkle. The laser is used to track this atmospheric turbulence, and one of the mirrors in the telescope bends hundreds of times per second in order to cancel out the blurring…

A typical laser pointer … is about 5 mW. That’s five one-thousandths of a watt. Not a whole lot of power. And yet it’s enough to blind airplane pilots. The lasers on the telescopes are in the range of 15-40 watts. The FAA calls a no-fly zone over the area when a laser is in use, and two people have to stand around outside in the freezing temperatures and watch for airplanes. Each of them has a kill switch to turn off the laser in case an airplane comes near. 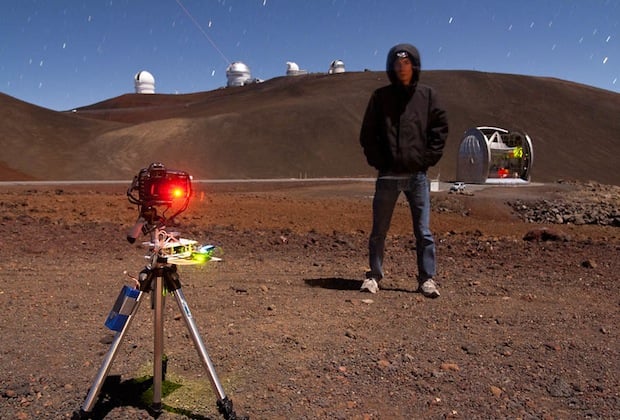 The whole time-lapse was filmed over the course of 7 nights — three in April and four this last Summer. By watching the observatory schedules, he could tell when the telescopes with lasers were going to be in use, and make sure he was there to capture it.

For more details about the time-lapse and how it was shot and put together, be sure to head over to Goebel’s website by clicking here. Alternatively, if you just want to watch the pretty time-lapse with all the cool lasers and skip all the technical stuff, well, we won’t hold it against you.

Image credits: Photographs by Sean Goebel and used with permission.

Crazy Remote Camera Deer Footage, Or: When Far Side Comics Come to Life