Here’s an interesting project that captures, in one fell swoop, just how many of us are connected through the social network known as Facebook. Called Faces of Facebook, it’s a website/webapp that compiles all 1.2 Billion+ Facebook users’ profile pics into a single static-like image, in which each picture is a different colored pixel.

The project was put together by creative technologist Natalia Rojas as a personal endeavor. According to Rojas, the project is something of a visualization of the global melting pot:

One of the other cool things you can do with the app is locate yourself, and no, you don’t have to zoom in and click on every colored square until you find where you stand. If you click on the location icon in the top right, you can connect via Facebook, and it’ll locate you as well as all the people in your friends list: 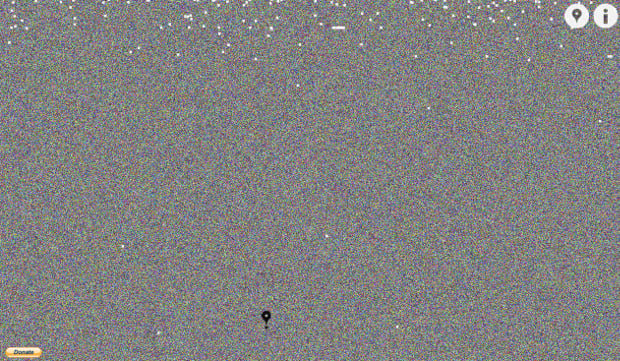 If you’re like me, and you deleted your profile for a few years only to restart it, you’ll probably end up near the bottom with all of the grandparents and preteens that joined the party late. If, on the other hand, you were one of the first people to join Facebook (or was it The Facebook back then?), you now have proof.

The site is pretty cool, and it’s interesting to play around with in addition to simply looking at the whole shebang and trying to fathom how many of us are connected through this digital network. To check it out for yourself, head over to the Faces of Facebook site by clicking here.

Oh, and if you’re worried about privacy, Rojas would like you to “Realx. We’re not breaking any Facebook privacy rules because we don’t store anyone’s private information, pictures or names,” she explains. “We just found a harmless way to show 1,272,471,864 Facebook profile pictures and organize them in chronological order.”