In early August, the New York Times ran an article on New York City window cleaner Brent Weingard alongside some footage that showed the man scrubbing and squeegee-ing away at massive apartment windows in the West Village.

Thanks to the vertigo-inducing footage of Weingard strapped in ten stories up, the piece got a lot of attention, but one of the main questions the Times got after running it was “who was the daredevil behind the camera?” Thankfully, they’ve put together a BTS video in response.

The man behind the camera was Times videojournalist David Frank, and he makes a great case for why photojournalists can’t just be replaced by smartphone-toting reporters. Working at the same height and strapped in to the same safety harness as Weingard, Frank isn’t afraid to tell you he was scared. 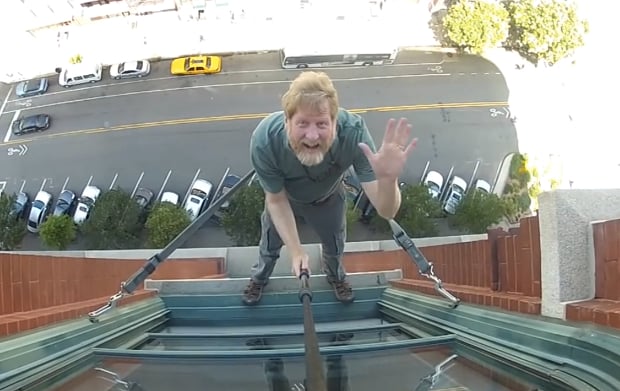 “After considerable coaching, I awkwardly got outside,” says Frank, “then came the scariest part of the whole process: leaning out… trusting that the little canvas belt that you’ve got around your waist attached to those two little metal pegs on the edges of the windows are going to hold you.”

Fortunately, he’ll also tell you that the images he got were well worth it — even if his wife and daughter both called him crazy when he showed them. Check out the video at the top to hear the story from the man himself, and click here if you want to read the original Times piece on Mr. Weingard, the man who does this kind of thing daily.