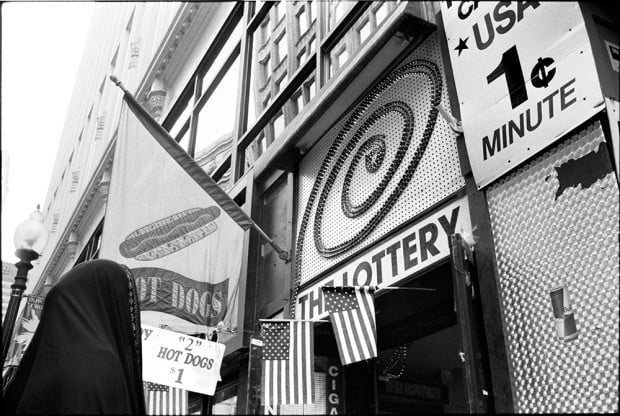 I was divorced about a week, so it was perhaps understandable that I was already feeling a little shellshocked when I started another day of work as an advertising photographer at Filenes in Boston on September 11, 2001.

A group of us had just come out of our morning production meeting shortly after 9:00AM when somebody yelled out that New York was under attack. We all made a beeline for the staff cafeteria behind the studio to join most of the store’s several hundred administrative staff crowded around a television set, silently watching the unbelievable horror unfolding in lower Manhattan and Washington.

I will never forget the look of utter despair on the face of the normally jocular senior design manager sitting next to me as the first tower fell.

Shortly afterward, an HR rep stood up and told us it was OK to leave if we wanted to. Maybe because we were working on a high floor of a building smack dab in the middle of the business district of a major city, most of the group didn’t need additional urging.

Others (myself included), not yet knowing the focus or the full scope of the attack, chose to stay and watch. But when the North Tower collapsed a short time later, our orderly but noticeably anxious group of stragglers moved toward the elevators. I took the stairs.

The ride home was a tense 45-minute subway and bus exodus with an uncharacteristically chatty scrum of total strangers, all packed together like paranoid sardines nervously acknowledging our potential “fish-in-a-barrel” target status.

I spent the next two days — just my dog and me and a television set — hunkered down in my dark, half-empty house in Watertown (not far from where, coincidentally, the Boston Marathon bombers would be killed and captured twelve years later). The eerie silence outside was only occasionally interrupted by the roar of a pair of fighter jets patrolling the airspace above metropolitan Boston.

I ventured back into the city two days later, on September 13th. My goal was to eventually get back to work, but I first needed to try to somehow document something about the terrible events that everyone by now knew had begun just across the harbor at Logan Airport.

The news media were starting to take note of the spontaneous sprouting of the Stars and Stripes everywhere, on highway overpasses, front lawns, fire trucks, cars, lapels and, very prominently, on Middle Eastern-owned businesses. Going with that, I was struck by the patriotic display at a familiar closet-sized lottery and cigarette vendor a half-block away from Filenes on Winter Street.

I’d always chuckled at the tackiness of it all, but that day the crazy spiral of flashing lights and signs advertising energy drinks, phone cards, and the current Powerball jackpot receded behind a batch of cheap American flags.

Still thoroughly convinced of the superiority of film photography over digital at the time, I had my street gear with me. Inside a canvas shoulder bag was a “Texas Leica” — a Fuji 6×9 medium format rangefinder permanently fitted with a 90mm “normal” lens — and my favorite camera/lens combination of all time: a REAL Leica, an M6 with a 35mm Summicrons for a wider field of view. Thinking that the shot was probably the spiral of lights framed by the flags, I knelt down, swung the bag around in front of me, hauled out the Fuji and framed up a tight composition.

Rangefinder cameras like the Fuji and Leica are designed to be used with both eyes open, the right one peering through a small “peephole” viewfinder while the left is free to look past the side of the camera at the scene being photographed. It takes a little getting used to, but once mastered, it is a really comfortable way to work. It also expands your sense of the scene to your peripheral vision, and that’s what alerted me to the person standing just to my left.

With the big camera still in front of my face, I shifted my eyes to the left. Unbelievably, a Muslim woman wrapped head to toe in a long, dark garment was staring intently, not at me, but at the flags I was photographing. The clock was now ticking.

I knew I had the promise of an iconic image that captured a historic moment in time as well as one that might even hint at the standoff between radical Islam and the West. The problem was that the Fuji’s 90mm lens was too long to take in the flags and signs and the woman — I would have to back up several feet to get it all in.

Fearing that doing so would tip her off and cause her to move away, I kept the Fuji in front of my face with my left hand, feigned interest in the flags while blindly groping in my bag for the wide angle Leica with my right, and hoped the whole time that she would just hold still.

Street photographers know how to keep their cameras ready to capture fleeting moments, both by roughly presetting exposure and by using the hyperfocal focus point of their lens to create a range of acceptable focus (auto focus is great, but not always as responsive).

In my case, the Leica was already set to be in focus from roughly 6-10 feet, and the exposure hadn’t changed much from images I had made earlier. All I needed to do was to quickly lower the Fuji and raise the Leica, lean back about a foot, frame the shot and release the shutter. It happened in an instant, but when I wound the film for a second frame, the woman became aware of me and moved on. I got 2 frames in all, and I instinctively knew the second one wasn’t any good.

But here’s the part I like — I knew with certainty that the first shot was going to kick ass. Unlike digital, you don’t get to see a film shot on a little screen on the back of your camera right away, you have to wait for it to be processed and printed. This forces a discipline on film shooters that is sometimes overlooked by digital shooters, but can be even more important now than it used to be.

Expert use of a film camera required a deep understanding of both the device itself and the photographic process. We had to know our gear and our materials pretty well to have confidence that we did, indeed, get the shot.

Rangefinder cameras like the Leica and the Fuji do not “black out” during the exposure like digital SLRs do, so when I released the shutter on that first shot, I was totally tuned in to the split second in time being burned onto the film. Instead of fiddling with autofocus points and “chimping” the LCD preview, I saw the moment of exposure with my eyes. And because I knew the Leica and I knew the process, I knew I had made one of those shots.

Hasselblad to Open Its First Retail Store in Tokyo