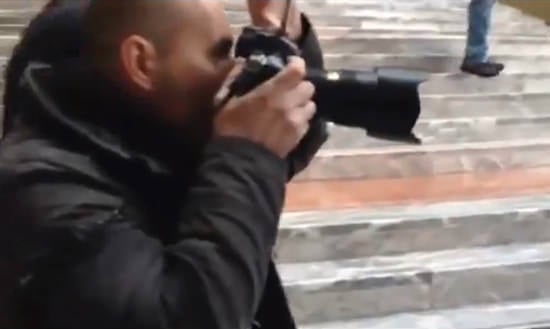 One year ago, in August of 2012, New York Times photographer Robert Stolarik was arrested for allegedly using his camera flash to interfere with police during an arrest. However, after taking a look at the evidence, it’s the police officer who is in hot water and may face up to 7 years in prison after being indicted on three felony counts and five misdemeanors.

According to The New York Times, the altercation took place on August 4th of last year, when Stolarik began taking pictures of a street fight at McClellan Street and Sheridan Avenue in the Bronx. When police officer Michael Ackermann asked him to stop, Stolarik quickly informed him that he was a New York Times journalist and continued photographing the proceedings.

This is where the stories given by Stolarik and Ackermann begin to diverge. Stolarik claims that one officer slammed the camera into his face, and then pulled him to the ground when he asked for badge numbers. The official statement given by the officers, however, told a different story.

The officers claimed that Stolarik pushed forward and accidentally struck a police officer with his camera after being given “numerous lawful orders” to step back. They also said he “violently resisted” being taken into custody, injuring another officer in the process. Ackermann’s statement in particular also claimed that Stolarik continuously discharged a flash in his face in order to interfere with the arrest.

Here’s a video showing another confrontation between Stolarik and the NYPD that happened while he was covering occupy protests in 2011:

Officer Ackermann’s story came apart when district attorney Robert T. Johnson examined the evidence and found that Stolarik did not use a flash. In fact, he didn’t even have one on his camera at the time. Additionally, no other officers or civilians reported seeing a flash going off.

Charges against Stolarik have been dismissed. Officer Ackermann, on the other hand, faces several counts related to filing false records and official misconduct, which could mean losing his job and up to 7 years in jail.

Speaking to her own newspaper, Times spokeswoman Abbe Serphos said the newspaper is “pleased that officials in the Bronx took a serious look at this case and brought an indictment after finding police misconduct,” but that they are still “troubled that the arrest of the photographer, Robert Stolarik, was made in the first place.”