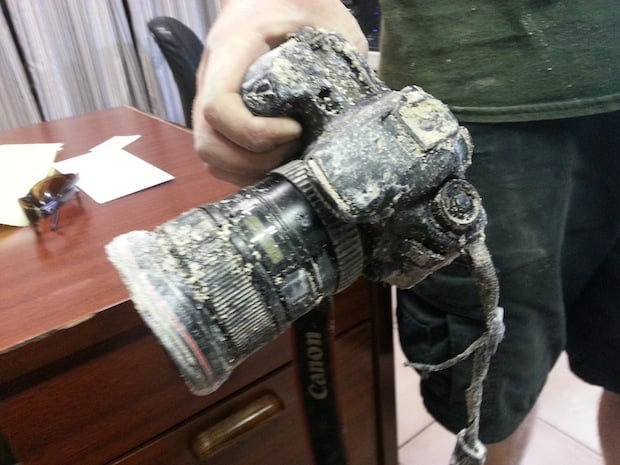 “Impossible” stories don’t seem to be all that impossible where cameras are concerned. For example, you might remember the Canon compact that found its way back to its owner after drifting 6,200 miles across the ocean to Taiwan.

Today’s impossible story isn’t quite so international, but no less amazing. After losing $1,300 worth of camera equipment to an alligator at the Everglades Alligator Farm eight months ago, another alligator was kind enough to return amateur wildlife photographer Mario Aldecoa‘s gear to him last week.

The story begins with a nighttime shoot at the alligator farm, where Aldecoa works putting on shows. During a holiday party 8 months ago, he set up his 60D and flash on a tripod about one foot from the water and started shooting.

He was hoping to captures a few good shots of the gators in the water, but instead, a particularly feisty gator captured his camera gear. Camera, lens, tripod and flash-unit were all dragged underwater in a matter of seconds. 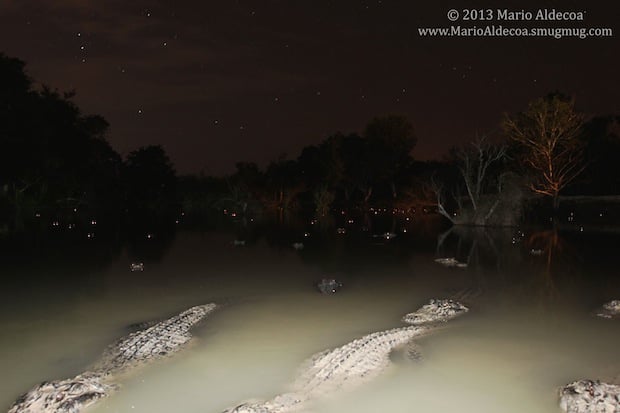 The next day, Aldecoa and some of his colleagues went back to try to salvage at least the tripod, but they had no luck. As he tells it to GrindTV, he though it was “bye bye camera.” But he was wrong. Fast-forward to last Friday — a full eight months later — when a keeper noticed the camera strapped to one of the alligator’s legs.

The camera was retrieved, and even though it doubles as a brick now, the SD card was still intact, allowing Aldecoa to pull out the photo you see above, taken just minutes before he believed his gear lost for good.

For us this is just an amazing “lost-and-found” story, but for Aldecoa, it was also a lesson. He loves getting up close and personal with the gators in his photography, but he knows now just how cautious he needs to be next time.

“The main thing I learned is to not be overconfident with the animals that I’m dealing with,” he told GrindTV. “You can still get close to a certain extent, if you understand their behavior, but you can’t let your guard down basically, and that’s kind of what I think I did.”

Image credits: Photographs by Mario Aldecoa and used with permission

Cooperation Wins Out Over Confrontation in the ILC Market