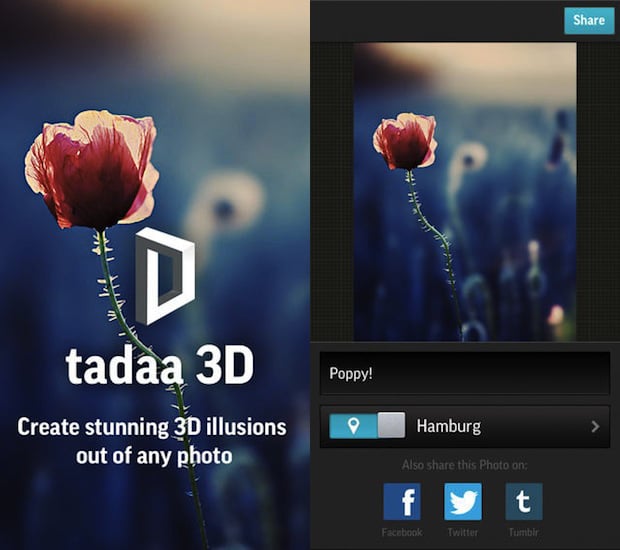 The Tadaa app for iOS is a neat camera and effects app that has managed to win itself some 3 million users since it first hit digital shelves. It’s done this by offering interesting effects and features that competitors like Instagram don’t — such as a Twitter-like re-share feature and the recently added ability to blur the background.

The newest feature out of the Tadaa camp, however, comes as its own stand-alone app rather than an in-app ability. Dubbed Tadaa 3D, it’ll allow you to “create breathtaking 3D illusions” using standard photos.

The feature is pretty straight forward. After you’re imported or taken a photo, you’ll have a chance to select the area you want made “3D” in mask mode by drawing over it. Then you can select your standard filters and/or adjust other settings before posting to Tadaa and sharing to either Twitter, Facebook or Tumblr. When viewed in the Tadaa app, the selected portion of the photo will appear 3D when your friends tilt the screen to look around, over or under the object. The versions shared via social networks, on the other hand, are automatically turned into animated GIFs so that your friends can experience the illusion outside the app.

Some sources are questioning whether a feature, no matter how cool, is worth its own stand-alone app. But if you think it is, you can pick up Tadaa 3D from the iTunes App Store for $4 by clicking here. Customer reviews so far seem to be favorable.