After almost ten and a half years of faithful service, the National Oceanic and Atmospheric Administration’s (NOAA) GOES-12 satellite was decommissioned last week. And in order to honor the weather satellite for over a decade of providing quality imagery, the NOAA decided to put together a time-lapse showing just how much data the satellite captured in the 3,788 days it was functional.

The GOES-12 — or “Geostationary Operational Environmental Satellite 12” — spent the first 7 years of its service as the GOES East satellite, witnessing everything from hurricane Katrina in 2005 to the blizzards during the winter of 2009.

Due to thruster control issues, the satellite spent its remaining 3 years in space further south, but still had a decent view of the norther hemisphere when Sandy ripped into the northeast in October of 2012.

Here are some closeups of hurricanes Katrina (left) and Sandy (right) as seen by the GOES-12 satellite: 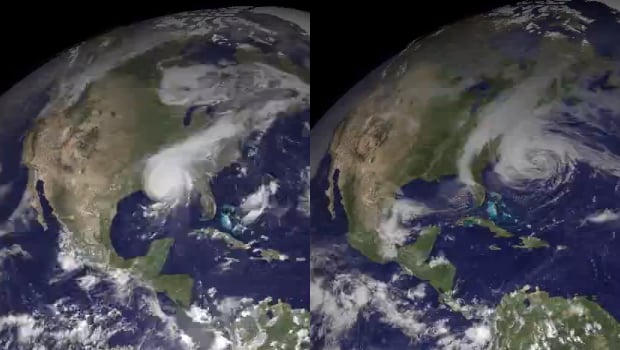 Originally designed to operate for only five years, the satellite proved to be something of a “little engine that could.” A commemorative time-lapse seems appropriate given the sheer number of days it spent capturing photos of Earth’s weather patterns.

Made up of 3,641 photos, the time-lapse contains almost one for every day of the satellites functioning life. To find out more head over to the NOAA website by clicking here.

P.S. In case you’re wondering, decommissioning the GOES-12 involved boosting it further into orbit, expending the remaining fuel and turning off the battery and transmitters. These actions make it less likely that the satellite will collide or otherwise interfere with other orbiting spacecraft.