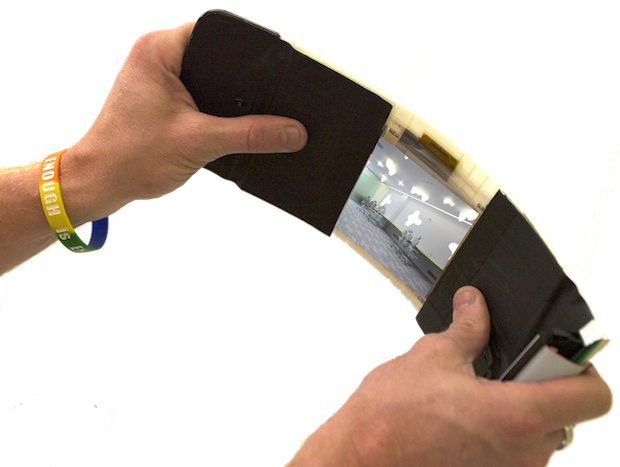 Companies and researchers are always coming up with interesting new camera concepts and prototypes that approach snapping photos in some unique way. The most recent creation to make its way across our desks is the FlexCam, a panoramic camera array that does away with sweeping or stitching to create panoramas. Instead, you simply bend the camera itself.

Created by Queen’s University’s Human Media Lab, the FlexCam takes advantage of flexible display technology to mount three cameras into a bendable array. Rather than sweeping your phone across or snapping several photos and then putting them together, you simply bend the actual camera until you’ve achieved the field of view you wanted, and then click the shutter.

Here’s a look at the prototype:

The FlexCam works by taking advantage of a thin and flexible OLED display that can bend with the array, and some bend sensors that help the image processor properly stitch the feeds from all three lenses.

“Our prototype allows for the photograph to act as a camera,” writes the Media Lab Team, “exploiting flexibility of the viewfinder as a means to dynamically re-configure images captured by the photograph.”

As with other concepts we’ve shared in the past, there’s no plan on bringing this to market and in this case not much demand given the other panoramic options out there. But who knows where this kind of experimentation with flexible camera arrays and bendable LED screens will lead in the future.

The HP Photoball: A Crowd Surfing Beach Ball with a Camera and WiFi Built In