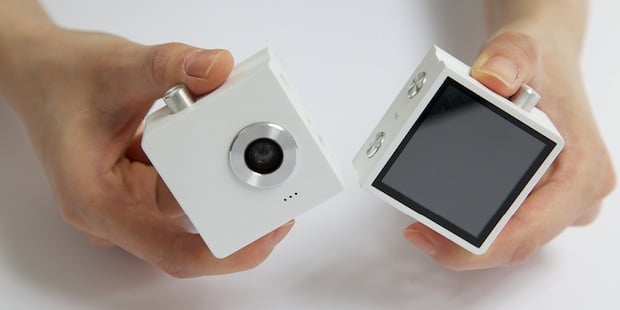 The downside to being the photographer in any given group is that you inevitably wind up being left out of the majority of the photos. One simple little student concept camera seeks to change that by splitting in two and allowing both subject and photographer to take a picture at the exact same time.

The camera is called The Duo, and it’s a concept cam put together by Innovation Design Engineering student Chin-Wei Liao, who is currently attending the Royal College of Art in London. He’s put together several working prototypes as the camera has evolved, and what started out as a pretty massive brick has turned into a manageable-sized camera.

As you can see, the name of the game is simplicity. There are only two buttons on each of the two halves (which are held together by a pair of magnets): one for shutter, and another to turn off the dual camera mode. When one shutter presses, both cameras take a picture — it’s as easy as that. Liao calls it a “binary” camera, and he’s excited to add another dimension to the photographic process. “[Duo] invites people to engage the photo-taking process,” says Liao. “By being both photographer and subject at the same time, it enables people to have fun documenting and being documented.”

To learn more about the Duo, check out the demo video above or head over to Liao’s blog here.