Vermont senator Patrick Leahy is a lot of things: an expert marksman, the most senior senator on Capitol Hill, Chairman of the Senate Judiciary Committee and third line for the presidency, just to name a few. But even though he’s had as successful of a political career as a Senator might ever hope to have, if you ask him what he would like to do full-time, he’ll tell you photography.

For years now, the aging senator has made a name for himself as the senator who you never see without his camera. And although we’ve shown you his work in the past, in the video above, Leahy himself weighs in on his work and photography in general.

The short feature was put together by CBS News to celebrate the senator’s 11th public photo exhibition — titled The Eye of Senator Leahy — which will be on display at Vermont’s Catamount Film and Arts Center until September 2nd. 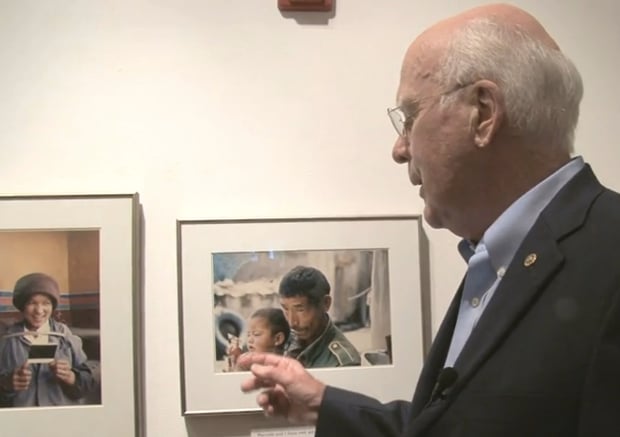 The exhibition includes many of Leahy’s most famous shots — such as this photo of former President Ronald Reagan’s inauguration — but while they’re impressive in and of themselves, they come to life when Leahy pairs them with a story.

The video shows Leahy at the kickoff reception of his exhibition, regaling the crowd with the sometimes funny, sometimes moving stories behind the 52 photographs he chose to display. And that’s Leahy’s goal, that his photos “tell a story.”

Because when time has eroded away the details of an event, what is it that you remember? “… the Hindenburg — I don’t know where it was coming from or anything else about it — but I remember that picture of it bursting into flame,” says Leahy. “It’s the photographs that you remember.”

Review: Olympus E-P5 Can Do Tons But Weighs Just Ounces