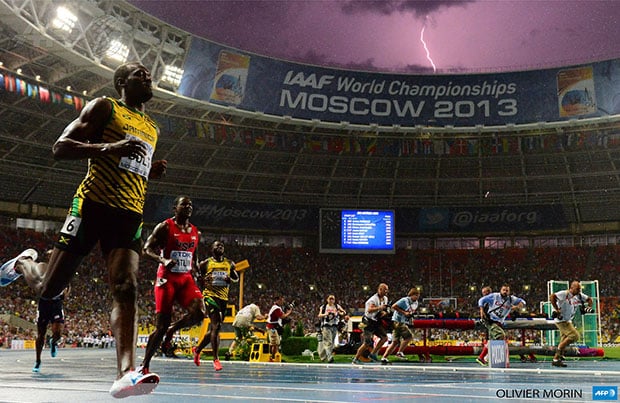 I took this picture with one of five remote-controlled cameras I’d set up by the side of the track to capture the race winner from various angles and perspectives. Of course, I didn’t know for sure who’d win, but when I was setting up the gear it seemed like a fair bet to focus on Usain Bolt’s lane!

The remote-controlled camera that took this picture was the fifth of my rig, set pretty far back, about 30 metres, from the finish line. The idea was to make a photo of the winner with his arms raised and with the stadium in the background, as well as capturing a little bit of the sky. I was thinking more along the lines of an enduring feature photograph, rather than your typical news shot.

When Bolt did win, he seemed somewhat unemotional as he crossed the finish line, only really reacting a moment later. Still, I of course fired all of my cameras – the one in my hands and the remote-controlled devices that can be operated with a foot switch.

My hand-held shots are transmitted directly to AFP’s photo editors, while those from the remote-controlled device go straight to my laptop. I started looking through these images one at a time – there were a few decent shots on the first four cameras. Then I opened up the pictures from the final camera.

I admit, with only a thumbnail view at first, I didn’t even see the lightning in the background, but after a moment I saw four photos with the bolt in the sky. Two of these weren’t usable because the cloud was too dark and the lightning was hard to see. But with the other two images, thanks to a little luck, the lightning is nice and visible; I’d gotten “the” shot.

It’s of course the lightning that makes the photo, because we’re talking about Usain Bolt here. Without the flash in the sky, it wouldn’t really be anything that special. I knew it was a good shot, but I didn’t anticipate the amount of reaction it would get.

Let’s be honest: the only things I was able to control were the framing of the shot and when to hit the remote-controlled trigger. The flash of lightning -– well, of course that can’t be planned, even if the stormy sky had been rumbling for 20 minutes and all of us photographers were trying to capture a lightning bolt.

This was, I think, a once-in-a-lifetime moment. In my 25 years as a photographer I’ve never had an uncontrollable external element make a photo like this, and I imagine if I tried again for a similar result for the next 50 years, it wouldn’t happen again. So, I only really give myself credit for one percent of this picture!

About the author: Olivier Morin is a photographer with the news agency Agence France-Presse. You can find his portfolio of images here. This article originally appeared here.

Image credit: Photograph by Olivier Morin/AFP and used with permission

Man Shares Murder Picture on Facebook After Shooting His Wife