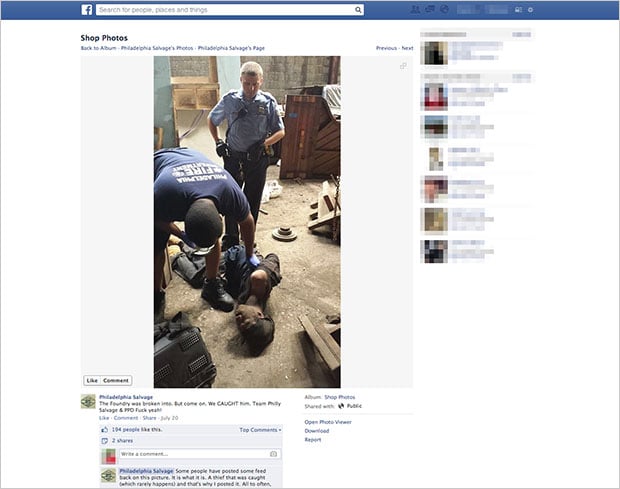 A photo of sweet justice or a picture of cruel gloating? That’s the debate raging on Facebook after a Philadelphia antique store posted a hard-hitting photo of a young man being arrested last week after being caught in the act of robbing the store.

The photo shows the unnamed young black man lying on the dirty floor of the store, in obvious discomfort, as a paramedic examines him and a police officer keeps watch. Accompanying it is the following caption by Philadelphia Salvage: “The Foundry was broken into. But come on. We CAUGHT him. Team Philly Salvage & PPD F— yeah!” 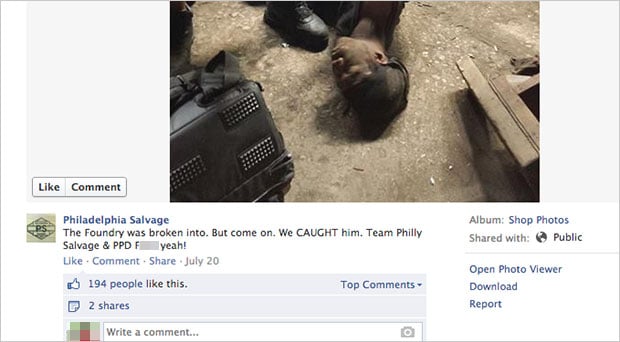 For some in the city, it was too much. The photo attracted widespread criticism on Facebook, with several commenters mentioning delicate racial sensitivities in the wake of the Trayvon Martin verdict.

“Will never, ever do business with Philly Salvage.,” wrote Janine Schwab. “Why would you do this? It’s literally the most unprofessional thing I have ever seen and gloats in the indignity of a fellow human being. What were you thinking?”

“I’ve been robbed before, too, and it is awful and I am so sorry for what you’ve been through,” wrote Diana Day, “but posting this photo is tasteless and vindictive.”

Others weighed in supporting the salvage company. “This is what getting caught looks like,” wrote Giddeon Rettich. “Good business practice or not, we don’t see things like this often. It’s worthy of discussion, it’s a compelling photo, it is a hard reality.”

Philadelphia Salvage was unapologetic in the end, refusing to take the photo down. “It is what it is,” according to the store’s Facebook response. “A thief that was caught (which rarely happens) and that’s why I posted it. All too often, people are robbed and they never catch him. It’s not a staged photo, it’s raw, which is how I felt being violated and put in harms way.”

Thanks for sending in the tip, Bas!