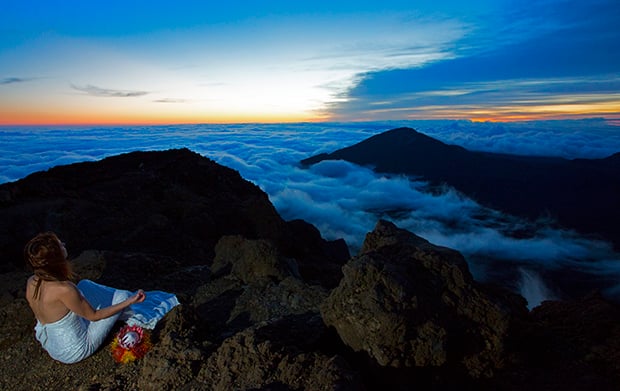 Photographer Jeff Salvage and his wife Jennifer got married back in 2008 near a volcano crater on Easter Island. While they were there, Salvage had his new wife wear her wedding dress for three photo shoots in various locations and at various times. Those shoots sparked a photo project idea that would take the two on an adventure around the world.

Since 2008, the Salvages have traveled over 135,000 miles to countries all over the world. At each location, Jeff shoots a portrait of Jennifer wearing her dress.

Jennifer says that she originally selected the dress for its simplicity and durability. After all, they needed to fly the dress 7,000 miles to Easter Island, drive it across that island, and carry the dress to the volcano crater by hand. It’s no wonder, then, that the white dress still looks very acceptable after over a hundred photo shoots — some of which are very adventurous.

The couple has visited countries such as China, France, New Zealand, and Vatican City. Jennifer has posed while paragliding, sitting on cliffs, riding dog sleds, and even shooting a basketball on an NBA court.

So how do the Salvages fund their wanderlust? Contrary to what you might think, they are not the 1%. They both worth full time in academia, and use clever tricks and budgeting to pay for their travels. Jeff tells us that they rarely have to pay for flights, that they stay at hostels and with friends as much as possible, and that any money made from book sales goes directly toward funding future trips.

Here are some of the photographs in the series so far:

The resulting project is titled, “One Dress, One Woman, One World.” The photographs can be viewed over on the project website’s gallery and have also been published as a book.

Image credits: Photographs by Jeff Salvage and used with permission

Was There Then: The Importance of Dates in Understanding Photography