Photography purists might want to look away on this one. The above video is a 9 minute time-lapse that speeds up 7+ hours worth of Photoshop CC work. That work was spent creating an intense composite that wound up consisting of 284 layers before it was all said and done.

The artist behind the project is Alexander Koshelkov, who simply (or not so simply) wanted to create a fantasy airship battle scene that people could download and use as a desktop background. Since you don’t typically see any fantasy airship battles in real life, he took to his favorite medium: Photoshop. 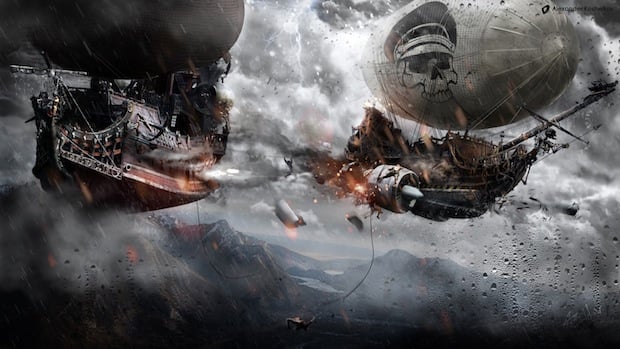 If the name and the work sounds/looks familiar, that’s because we’ve featured another of his time-lapses before. That plane crash composite took him four and a half hours and required some 244 layers.

Like the last one, this is mostly put together from pieces of other images. Two different boat photographs, an airplane engine, etc. were all used to craft the final product (which you can download at high-resolution here).

The final image is called Airship of Doom, and like the plane crash before it, it goes to show just how good some people are at working in Photoshop. To see more from Koshelkov, check out the previous time-lapse linked above or subscribe to his YouTube channel by clicking here.