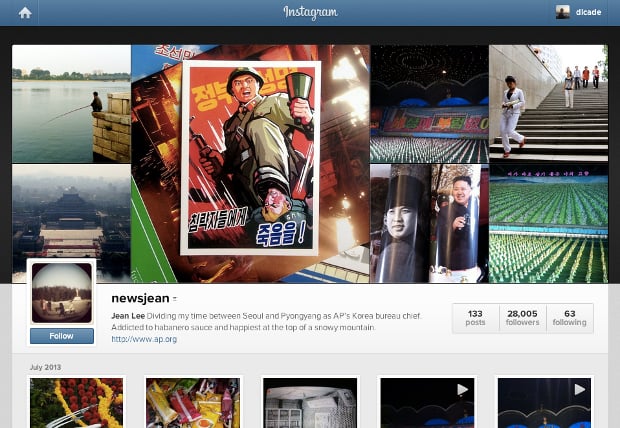 Back in February, the AP’s David Guttenfelder and Jean Lee were some of the first to begin uploading Instagram photos from inside the closed off country of North Korea. A rare look inside a normally very mysterious country, both of their Instagram accounts became the subject of many a headline.

As with the first Instagram photos, the first videos reveal the same “curious, strangely beautiful, or melancholy details” the two photographers spoke of in February.

From a panoramic view of Pyongyang, to soldiers patrolling the demilitarized zone, to a restaurant worker adding up receipts while the TV behind her plays military videos, each clip opens a small window into the lives of North Korean citizens.

Here are a few of the videos they’ve uploaded so far:

You can see a lot more by following Guttenfelder and Lee at their respective Instagram accounts.

The videos are made possible by the same mobile access that allowed Guttenfelder and Lee to begin uploading photos earlier this year. But lest you think that means the North Korean public enjoys the same photographic freedoms, it’s worth noting that when the network first went live in February, citizens were only allowed to use it for accessing official state news and texting.

(via Mashable via Gizmodo)

Update: As commenter Steven Wade kindly pointed out, Instagram user Drew Kelly has been posting Instagram photos from inside North Korea for going on a year now. You can find his contributions here.