Yesterday, we shared the groundbreaking news that Magic Lantern’s a1ex had managed to squeeze 3 more stops of dynamic range out of Canon’s 5D Mark III and 7D by using a new feature dubbed Dual ISO. Today, we have a comparison that shows what RAW video shot on the 5D Mark III looks like taken both with and without the Dual ISO feature enabled.

The video was put together by Michel Anthony Visuals, and seems to confirm everything (both good and bad) that a1ex claimed the Dual ISO feature would bring to the table. On the plus side, the decrease in shadow noise is substantial to say the least. On the other hand, there is a noticeable increase in moire/aliasing. 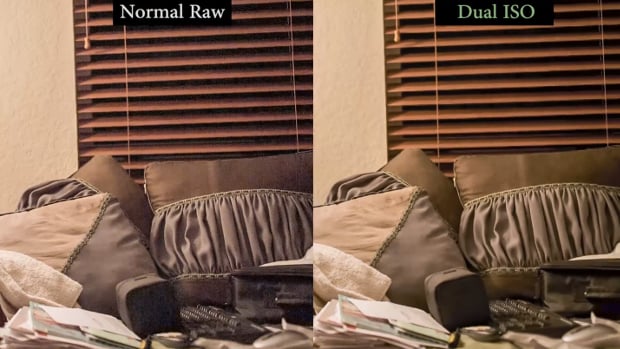 Another issue that a1ex said might come up is a loss of resolution. Anthony, however, had this to say regarding what he calls a “minor decrease”:

I think that is a moot point… the footage wouldn’t even be usable in my test scenario without the Dual ISO feature (short of lighting the scene properly). I’m sure in many typical usage scenarios, the benefits will far outweigh any disadvantages.

Keep in mind, this video was taken in the absolute worst case scenario. Shot handheld in a dimly lit room with a tungsten light in the frame, Anthony wanted to give the feature ample opportunity to show both its good and bad sides. In a better scenario, Dual ISO’s benefits might even further outweigh the pitfalls.

To see the comparison for yourself, click play at the top. And if you want more info vis-à-vis camera settings used and post-production editing done, head over to Vimeo where Anthony lists all of the pertinent technical information in the video’s description.