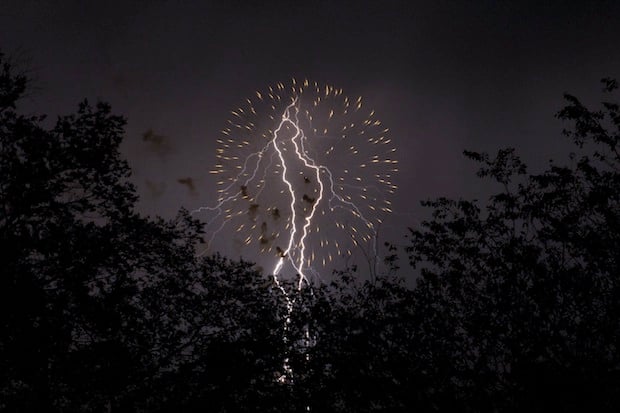 Some people have all the luck right? The above photo was taken by photographer Jason Smith, and it’s a great example of the right place meeting the right time. While taking 4th of July photos at a friend’s house, he was able to capture a lightning strike that synched perfectly with some fireworks.

A photo minor at the University of New Mexico who has always been into photography, Smith tells us he didn’t start pursuing it himself until last summer when he purchased a Canon T3i. We’d say his results aren’t bad for having his camera only a year.

The photo was taken from the roof of his friend’s house in Rio Rancho, New Mexico. Once he found the perfect vantage point (with some help from his girlfriend), he set up his tripod and remote cable and began taking 1-3 second exposures of the fireworks.

Here’s a closer look at what he eventually captured. You can also click here to see a higher-res version: 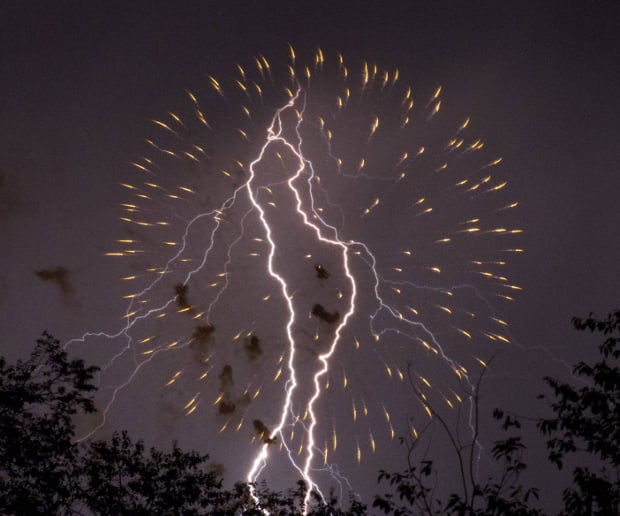 The perfect shot didn’t come right away though: “I did see that there was a lightning storm coming in but the lightning strikes were too out of frame with the fireworks for my liking,” Smith shared with us via email. “I honestly was really lucky that the wind carried the storm over to my frame, and I was able to get quite a few other firework and lightning shots.” You can find some of the other shots he captured over on his Flickr stream.

Of course, not everyone is fortunate enough to capture this kind of shot. So if you’re not able to get the perfect mix of natural and artificial phenomenon like Smith did, you could always create a composite like the one below by 17-year-old photographer Andy Hodapp: The photo was put together from two different shots, which you can find here and here. Both photos were taken with his 5D Mark II and 50mm f/1.8 II. The composite doesn’t have the same effect as the lightning shot, knowing that it wasn’t created entirely in-camera, but the final photo is impressive nonetheless.

To see more from Smith and Hodapp, check out their Flickr streams here and here, respectively. Smith’s stream includes several more lightning and fireworks shots (although the one at the top is the best), while Hodapp has an impressive portfolio for such a young photographer.

Image credits: Photographs by Jason Smith and Andy Hodapp and used with permission.