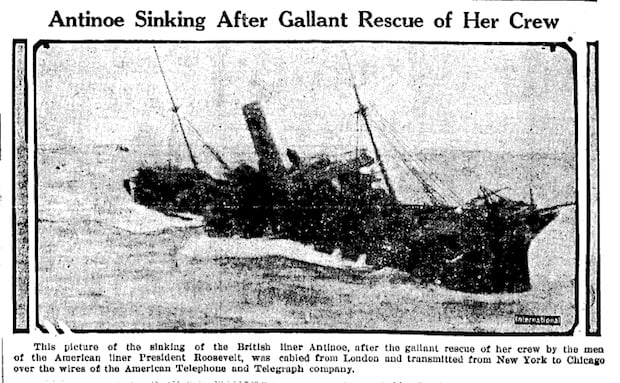 These days, it’s easy to take for granted what the magic of the Internet, wireless technology and fiber optic cables has made possible, but there was a time when sending a photograph a long distance in a short time wasn’t quite that easy.

For instance, in 1926, someone on an oceanliner called the S.S. President Roosevelt snapped the above photo of the S.S. Antinoe during a rescue attempt. When that photo was sent almost instantly from London to New York City, it was such a big deal that the April 1926 issue of Science and Invention printed a huge infographic to show its readers how this miracle was achieved.

Here’s that graphic (click the photo for the full-res version): You’ll have to zoom in on the full-resolution version to get the picture, but the process goes something like this:

Once the negative arrived in London, it was developed in stages, and each progressively more detailed photo translated into dots on perforated tape. That info was then sent over the Atlantic cable to New York, where it was “copied” onto another piece of tape, which was then translated using a special machine in a newspaper office into a fresh negative.

That photo was then copied by an engravers camera, printed on a copper plate, etched, sent to press and printed on a newspaper. And thus, a photo from London made its way all the way to New York City as “instantaneously” as they could manage at that point in time.

Today, all we have to do is press a button, but as Matt Novak over on Paleofuture points out, an infographic that shows what has to happen in that instant to distribute a photo from our phone to the entire Instagram community would probably be just as complicated … if not more so.