It was only a matter of time until spammers got ahold of Instagram, and yesterday it finally happened. Even though the Facebook-owned company hasn’t yet made any moves into advertising, you may have noticed an awful lot of pictures of fruit on your feed this weekend.

That’s because some spammers managed to hack many an Instagram account Saturday, posting random photos of fruit and singing the praises of a “miracle fruit diet.”

First reported by Om Malik over on GigaOm, the spammers hacked accounts, posting photos and changing bio information to include a bit.ly link to a fake BBC page about this “miracle” weight loss plan. In response to Malik’s request for comment, Facebook admitted that “a small portion of our users experienced a spam incident where unwanted photos were posted from their accounts,” but assured users that “our security and spam team quickly took actions to secure the accounts involved, and the posted photos are being deleted.”

Using the term “small portion,” however, may be a bit of an understatement. As of this writing, the bit.ly link that GigaOM references has been clicked over 30,000 times, and its victims are spread out all over the globe: 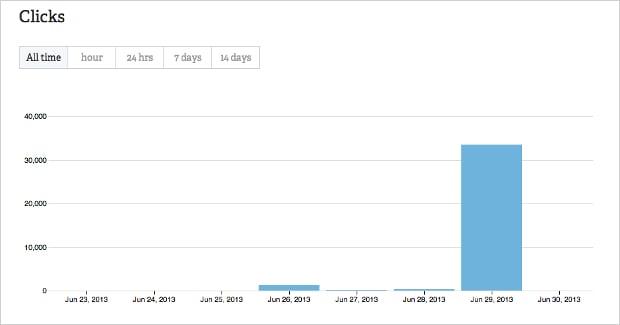 Since the clicks seem to have dropped off entirely as of today, it does look like Facebook has indeed solved the problem and returned control of those accounts to the rightful owners, but this is at the very least a proof of concept for spammers looking to take advantage of the 130 million monthly active users Instagram boasts.

Although Facebook has taken care of the problem, an answer to the question “what went wrong?” doesn’t seem to be forthcoming.