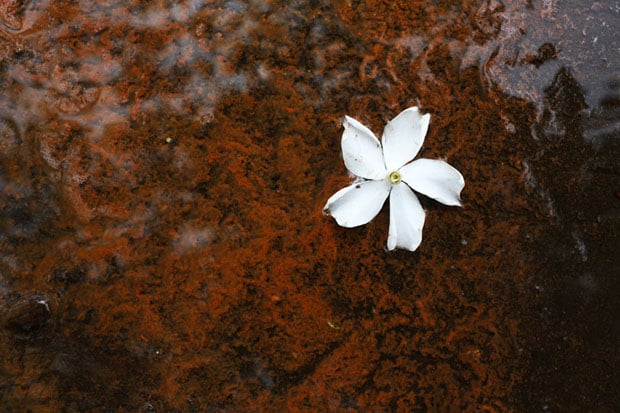 In April of this year, I travelled to the Indonesian capital of Jakarta for the first time. I was excited to visit this new city and start to photograph in one of the world’s most underreported emerging economies. I had read stories about the city’s challenges with water and flooding, which is why I wanted to photograph there and continue my work on environmental issues in developing nations. I wasn’t prepared for the shocking scenes that I was to witness in my time in the city.

One of my first impressions of this Southeast Asian megalopolis was not the not the eclectic culture and diversity of the fascinating Indonesian people, or the mix of traditional and modern architecture—it was the smell. 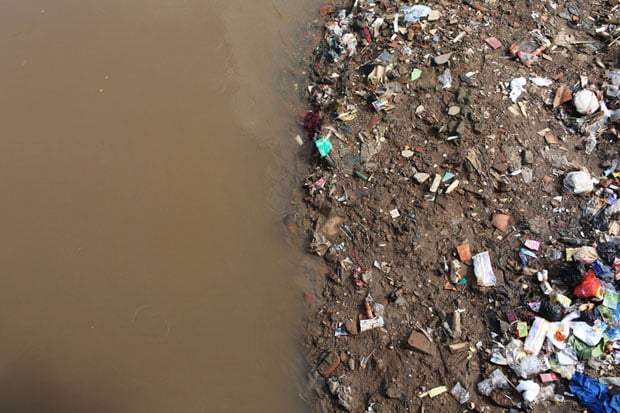 That smell emanated from the rivers and canals that weave their way through this city of over 10 million people. 400,000 liters of waste are dumped into the capital’s rivers and canals every day. Supposedly equating to the weight of 140 elephants, according to a 2009 report in the Jakarta Globe.

Built on the confluence of 13 rivers, Jakarta’s history has been one involving vigorous trade with countries around the world. During the Dutch colonial era in the early 17th Century onwards, a network of canals was built that helped relieve the city from flooding which, at that time, only occasionally affected the city. 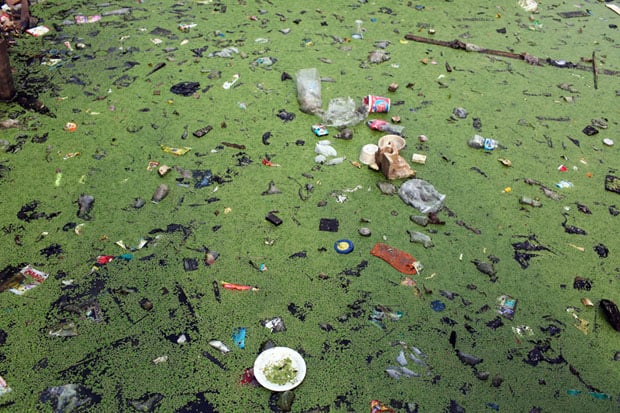 Today, that network of canals has fallen into disrepair and all of the rivers and canals have become choked with pollution. Residents readily throw household waste directly into the waterways which gather together at many points along the rivers, especially at the failing sluice gates along the canals. 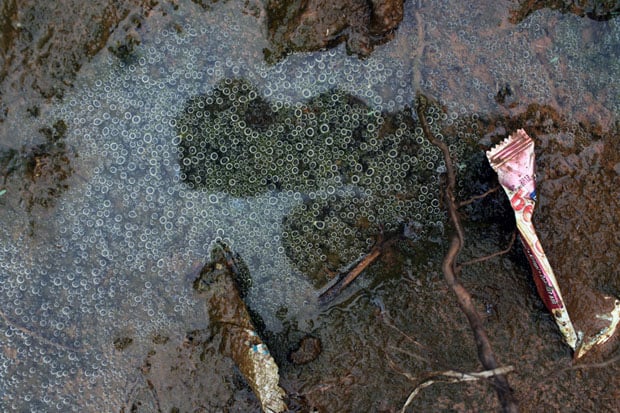 The problem is exacerbated by industrial pollution that is also released into the rivers upstream. Excess nitrates and phosphates from this pollution encourages the rapid growth of algae and subsequent eutrophication, the process by which algae covers the surface of waterways, restricting the amount of oxygen in the water and effectively killing off aquatic life below. 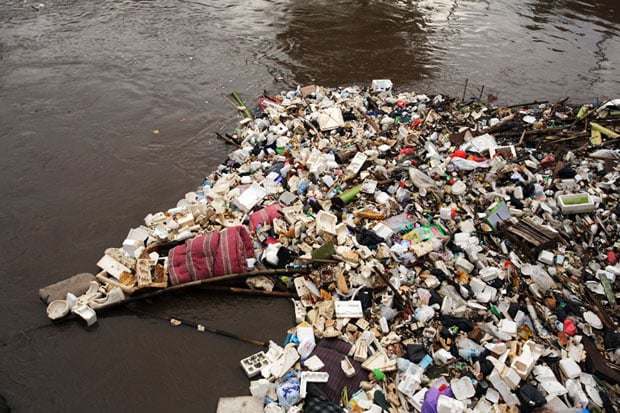 The poverty levels in Jakarta are staggering and sobering. It is thought that over 5 million residents live in slum communities in Greater Jakarta, many of which are found along the waterways of the city.

Standing one morning in one such community on the banks of the Ciliwung River in central Jakarta, I photographed a young family who ran a small shop selling sweets and snacks. A few metres away from the storefront were the banks of the river. Its brown waters swiftly moved past us, carrying with it plastic bags, bottles, polystyrene boxes and other random items discarded further upstream. 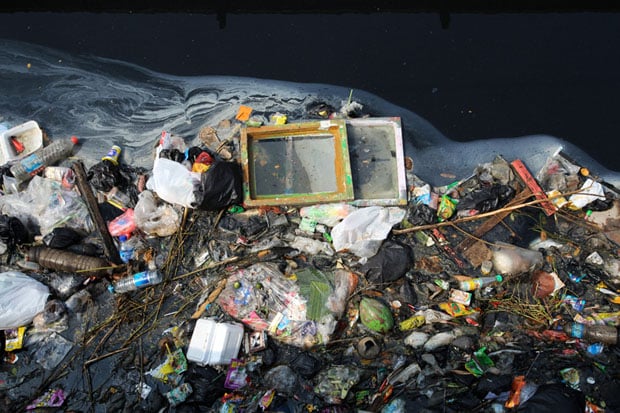 Across the river, a wall of ramshackle houses built on stilts perched perilously close to the surface of the water. Regular sounds of splashes could be heard as toilets were emptied, discarding the contents straight into the water beneath. The river, like many throughout Jakarta, had effectively become a sewer. 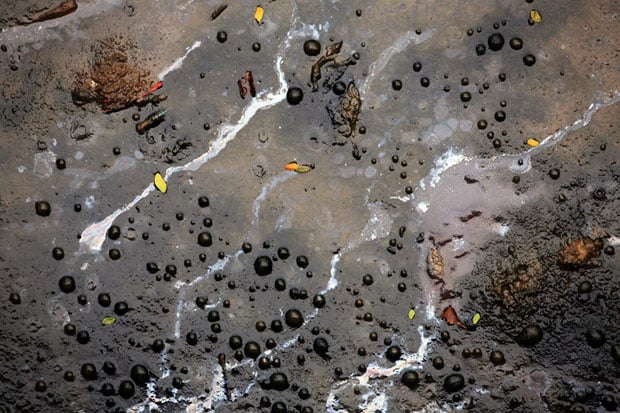 As I travelled around the city documenting how the residents were being affected by issues such as rising sea levels, flooding and climate change, I made a note to start photographing some of the pollution I came across. I decided to focus on the form, shapes and colours that I saw. I did this, as I wanted to try to show the issue in a new way and try to draw the viewer in, even though the scene actually might make the viewer want to turn away. 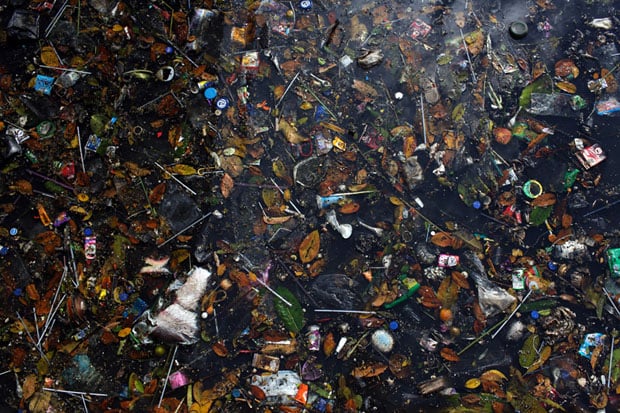 One of the most shocking scenes I witnessed was in the small community of Muara Baru in the north of Jakarta. My guide and I were exploring some of the communities that lined the area’s waterways when we came across a river which was completely covered in refuse and trash. I had never witnessed anything like it. I felt a deep pang of sadness as I looked upon the scene before me. I stood there stunned for some time before I took a picture. 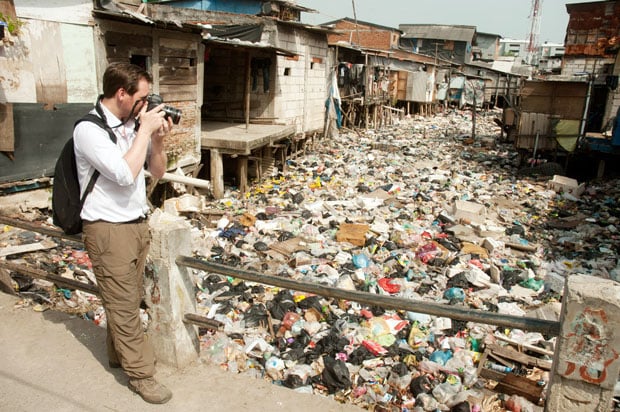 In January, floods had inundated the city and in this particular community, large amounts of trash had been washed upstream and deposited there. Children played by the water and women cooked food on stoves just metres away. It was a depressing scene.

Water pollution is such a critical issue in Jakarta. Sadly, it is often the poorest communities that are the most at risk and the first to be affected. I saw some shocking scenes during my time in these communities but I met some of the warmest and friendliest people I have encountered whilst travelling in Asia. 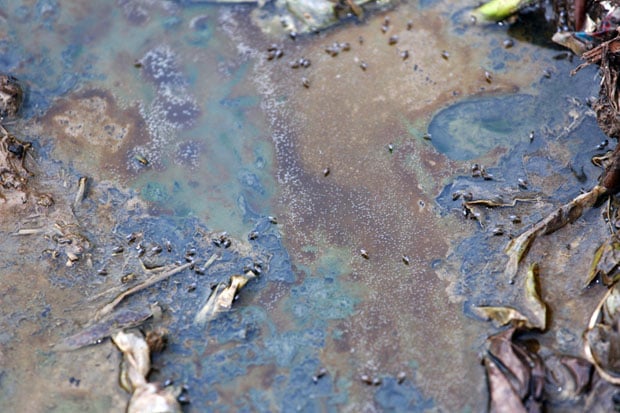 Changes are beginning to take place in Jakarta. Reservoirs and rivers are being dredged and the government is coming under more and more pressure to effectively deal with these issues and prevent the inevitable health issues that come with living in these conditions. It will be a long battle however and the future of the city and its residents is still very uncertain.

Which of Us Dies First? The Achilles Heel of the War Reporting Business

Scent-ography: This ‘Camera’ Captures Smells Instead of Pictures