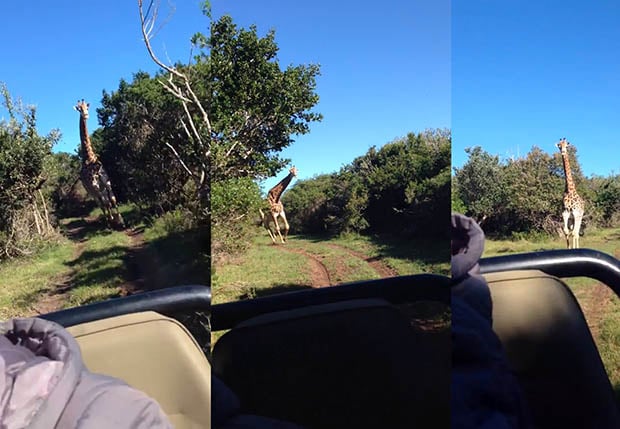 If you ever take your camera on a safari to photograph animals in the wild, here’s one animal you should be careful around: the giraffe.

Sure, it doesn’t have a dangerous reputation like lions or other fierce animals at the top of the food chain, but if you’re not careful around the world’s tallest terrestrial animal—especially the hormonal ones—you may quickly find yourself in a situation that’s strangely similar to a famous scene in the movie Jurassic Park.


There is more than one viral video on the Web showing what can happen when you get too close to giraffes in your safari vehicle. Here’s one of them:

The footage emerged after a group of DSLR-toting tourists on a safari approached a 13-foot-tall 2 1/2-ton giraffe for some photographs. ABC News reports that the giraffe may have had a “hormonal imbalance,” which caused it to suddenly become aggressive toward the jeep.

As the driver tried to hurry away and escape, the giraffe gave chase and used its body to ram the vehicle, instantly snapping off one of the side mirrors.

If you think giraffes are gentle, cuddly creatures, think again: the animals use their massive 500-pound necks as weapons.

The area is reportedly being called “giraffic park” after the encounter went viral online.

Another similar video showing a “giraffic park” chase emerged a couple of months later. A man named Henk Roos uploaded this video to YouTube in May:

Roos says that the “hormonal giraffe” chased their jeep for about 5 kilometers (~3.1 miles) before he pulled out his phone and started recording (yes it’s vertical video, but at the same time, giraffes are pretty vertical themselves).

“You can see how he gets closer and closer after every turn,” Roos says. “We started to run out of road and the ranger banged on the side of the jeep to scare him off. We started to make a noise and he stopped.”

There you have it… PetaPixel’s wildlife photography protip of the day: keep your distance from hormonal giraffes.