If you’ve gone to a concert or public event or even certain art openings recently, you’ll notice that something is amiss. In the past, people would look, enjoy and try their best to experience the moment when they attended such things. Now, many of them are doing their best to craft the most likeable smartphone photo.

The BBC’s Newsnight is troubled by this trend, and so they set out to discover if the smartphone photography movement is doing more harm than good.

One of the examples Newsnight’s Stephen Smith uses to illustrate the point is this viral comparison photo from earlier this year. At the top we have the view at the Vatican as people bid farewell to Pope John Paul II in 2005, and at the bottom the same ceremony for Pope Benedict XVI in 2013. Which crowd do you think remembers their experience best? 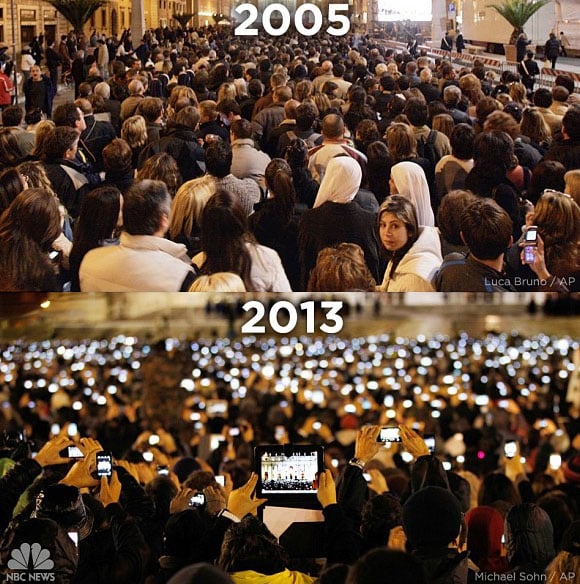 It could be that the 2013 crowd with their pictures and videos will remember the moment best simply because they have a record of it. But it’s also possible that they only actually experienced the moment on their smartphone or tablet screen at the time, not truly engaging with it.

It’s an interesting question that the report takes on from several angles — enlisting the help of curators, musicians and even a psychologist specializing in narcissism — and we’d like your input as well. What’s your take? Is smartphone photography killing our memories and experiences, or just helping us preserve them?

Switching to the Fujifilm X100 from the World of DSLRs

Out With the Old, In With the New: Photos that Show the Modernization of China