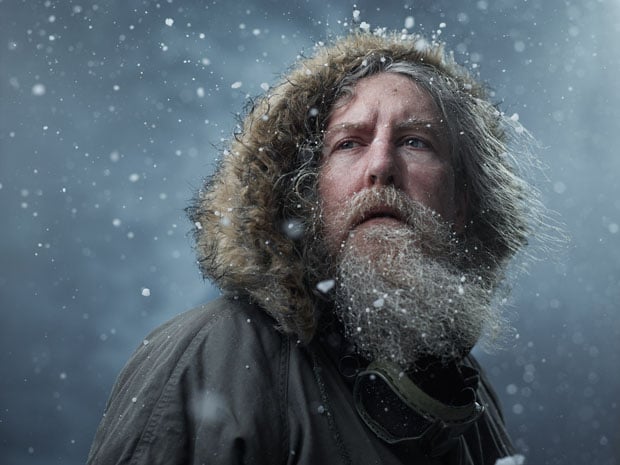 I wanted to create a dramatic portrait series of “arctic explorers” that appeared to be taken outside in a blizzard. The concept for this shoot was something I’ve been mulling over for quite awhile, but never had the proper platform to pull it off.

Finally, when I went on a little workshop tour to raise funds for a personal film project of mine, culminating in a creativeLIVE broadcast on the Internet, I knew this would give me the resources to pull off something with a little bit of production value.

Creating these portraits in front of a live audience would give my students a taste of how one of my shoots work step by step, but also give me the opportunity to create images I can use in my actual portfolio. I had everything I needed at my disposal: a large space to work in (verrrry tricky to find in NYC), and studio lights, and interesting subjects volunteering their time.

Photographing something I was excited about allowed me to be a better instructor because I was shooting something I truly cared about executing to the best of my ability. 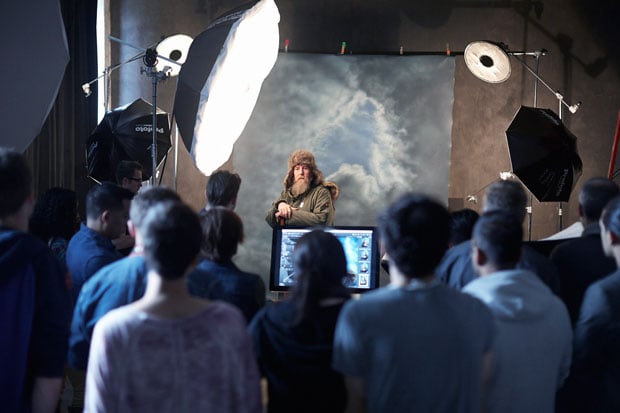 I call these kind of shoots “test shoots” because they aren’t commissioned by any clients. They have one main goal: to push my portfolio further towards the style of photography I want to be hired for. It’s important for me to keep creating new work that isn’t the same as the work I’ve been hired to create in the past, because if I’m only shooting the same kind of stuff over and over, it’s very unlikely that I will be hired to shoot anything else.

Over time, if you aren’t proving that you are capable of shooting other things, you might find yourself stuck in a bit of a rut, never really photographing anything new. I like to keep things fresh and progressing forward. It keeps me sane.

Now, because I decided to create this series in an educational workshop setting, it wouldn’t make sense for me to shoot on location, or even outdoors at all. (I can just imagine bringing 20 enthusiastic students out into a blizzard for a day or two!) Since we weren’t shooting on location and we were fabricating a scene from scratch, we needed to have complete control over the environment. We also needed to be in a comfortable environment in which I could explain every step to the students and pause for questions.

Although it appears to be an elaborate setup, when you break it down step by step, you can see that it’s actually quite simple. The camera is great at lying, especially in close-ups where you only see a small part of the scene. Let’s deconstruct this image first by noting the props that are used, and then later I will explain the lighting.

Each element was carefully fabricated to achieve a sort of visual cohesion throughout each layer of the photo. The subject stands in front of a hand-painted background from Broderson Backdrops resembling a stormy sky. I’m a big fan of getting things right in camera — this is not something I want to add in post later. With this background thrown out of focus, it doesn’t look that different from actually shooting outdoors.

The snow is also a real effect shot in camera. It is created from an American Dj Snow Flurry Snow Machine, which blasts out soap suds that resemble snow, especially when thrown out of focus.

I made sure the “snow” was not only falling directly on the subject, but also covering a wide area from behind the model all the way up to my camera lens for a realistic depth of field. After all, in real life the snow would be falling both in front of the camera, and behind. I was surprised to find out after my shoots that these snow machines are actually quite cheap. In fact, at $108.98 on Amazon, it would have actually been cheaper to buy the machine than to rent it for just two days.

Another special effect used in these photos is the haze from a haze machine. This atmospheric layer of fog added a little bit more depth to the background, and allowed us to see some flare from the backlights, as if the sun were caught in the blizzard’s drift. Because the haze likes to come out of the machine a bit directional, I had what I like to call “waft man” fanning the haze so it would spread evenly throughout the set. I made a poor student do this at each workshop, and I’m sure their arms ached the next day. 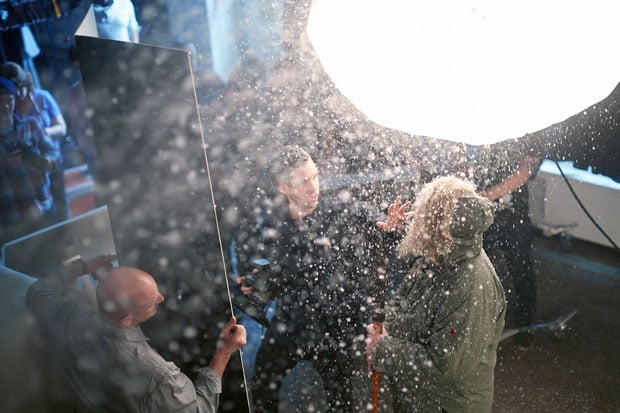 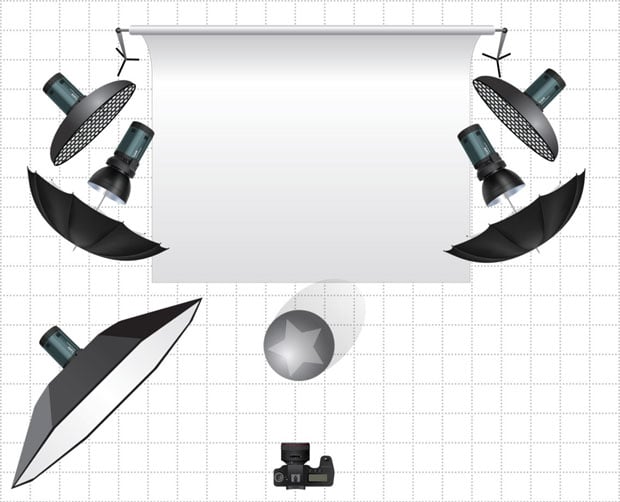 Here’s a list of the equipment used as well as links to where you can buy them:

I like to light in layers and be able to control each source individually. Let’s start with the main light, a large 74” Elinchrom Octabank modifier being fitted to a Profoto head and pack. In some of these photos, a Profoto-equivalent octabank was used, but I much prefer the quality of light from the Elinchrom.

Next, there are two white beauty dishes as backlights which light the subject and falling snow from behind with a soft, wrapping light. Rather than have the two beauty dishes set at an equal strength, I preferred to have one slightly brighter than the other. This added to the realism and motivated more as one sun coming from one side. I imagined the sun trying to peak through the layers of falling snow, and being diffused.

Finally, there are two white umbrellas turned on to the painted backdrop, set at the same strength. These are there to light the background evenly, and were plugged into their own individual power supply. This way, I could increase or decrease the exposure of the storm clouds in the background based on preference.

The subtle balance between these different lights and special effects is what truly counts. If the background gets too dark, it will not match the foreground, and vice-versa. When we brought together all these different elements in camera, it left me with very little photoshopping to do. 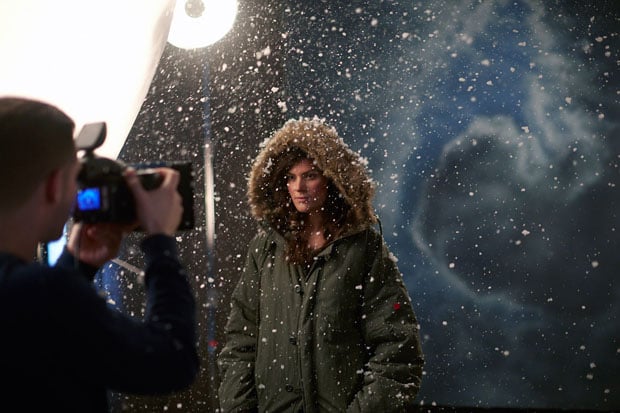 As I shot, I had to keep an eye on the technical aspects, but more importantly, I had to make sure my subjects had engaging expressions. By posing them dramatically to look as if they were moving or looking for something, I was able to achieve a more dynamic image.

The make-up was slightly different with each subject and got a little more complicated as each workshop progressed. Our first subject, Henry, didn’t have any makeup. The only “snow” on his coat came from turning him towards the snow machine before shooting, and then having him stand back in place.

Summer Rayne Oakes, our second subject, had her makeup done to look like she was a little more weathered, but still, no “snow” other than what came from the snow machine.

For our third setup with Brett and Terra, we got a little more advanced with the makeup and visual effects by adding some “ice” to the face, and some finer snow particles to the jacket. 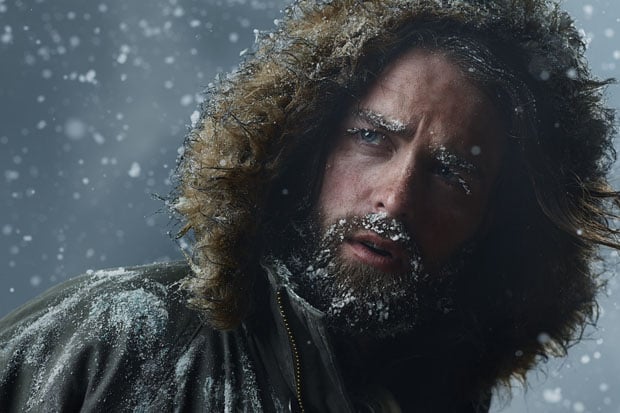 Photographing this in front of a live audience was a daunting task. Sometimes things don’t look as good as you envision them at first. You have to tweak and tweak and teak until you finally achieve what you set out to do. I think the most interesting parts of the shoot to the students of the workshop were actually where I failed at first, and overcame the mistakes step by step.

Since I had a clear vision of the final image in my head, full control over the set, and knew what each light was doing, it was very easy to progress from the messy test shots and create the image I had imagined. Normally in photo shoots my process is very mental. Here, because it was a educational environment, I had to stop and explain things along the way. This was a very interesting exercise for me, and I’d certainly consider doing it again in the future.

Here’s a segment from the 3 day “Commercial Portrait” course I taught:

If you’d like to watch this entire photo shoot take place — along with four entirely separate shoots and hours of me talking about lighting, Photoshop, and much more — you can purchase and download it from creativeLIVE.

Even with a photo as “complex” as these blizzard portraits, when you break it down piece by piece, light by light, and effect by effect, it becomes quite simple. If you can fully understand the way one light is affecting your image, it’s likely that you can understand one million lights.

About the author: Joey L. is a Canadian commercial photographer, director and published author based in Brooklyn, New York. Visit his website here and his blog here. You can also find him on Twitter, Facebook, and Google+.This article was originally published here.