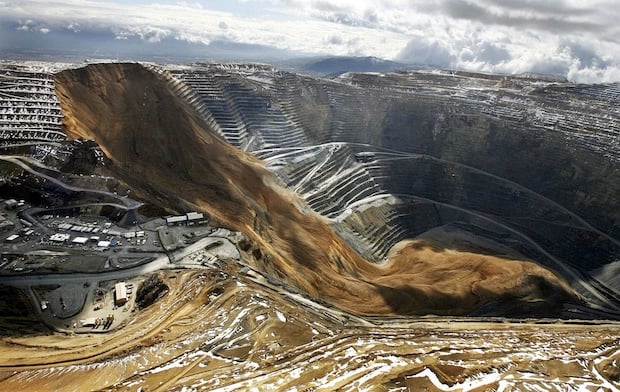 A couple of months ago, a massive landslide at Kennecott Utah Copper’s Bingham Canyon Mine cut production at the second largest copper producer in the US in half. What began as a movements measured at only fractions of an inch, turned into a 165-million ton wall of loose dirt tumbling down the northeast section of the mine around 9:30pm local time on April 10th.

The picture above was taken after the slide by Deseret News photographer Ravell Call, and captures the sheer size of a slide of this magnitude (some experts believe that it’s the largest ever recorded in the US). To put what you’re seeing in perspective, if the debris from the slide were spread out over NYC’s Central Park, the park would be buried approximately 65 feet deep.

Bingham Canyon Mine is the largest man-made excavation on Earth, and as such, even the high-res photo has a hard time doing the slide justice. Fortunately, Kennecott was prepared for the slide. The company is always using four redundant systems to keep track of any and all movement in the mine.

When their special, 96,250-photo-per-minute radar began detecting significant movement, the company immediately set about moving buildings, personnel and equipment to make sure that the slide would cause as little damage as possible.

Even with all of the detection devices at work, however, the company couldn’t have predicted how deep the slide would travel down the mine pit, and a good deal of equipment wound up buried in the bottom right of the photo.

You can find more of Call’s photographs of the landslide over at Deseret News. It’s a gallery of landscape photographs that you probably won’t be imitating anytime soon.

Photo Prank: Make Your Friends Pose for a Still, Then Take Video Until They Notice