Want to photograph or film a humpback whale underwater? Try listening for its “song.” The video above, uploaded by YouTube user westh2o, shows a surprise underwater encounter he and a group of divers had with a large humpback whale back in October 2011 (the actual encounter is at 3m20s).

westh2o and his friends were diving at around 40 to 75 feet underwater at Moorea,﻿ French Polynesia, about 9 miles northwest of Tahiti. One of his best friends from Germany was actually the one capturing photographs and footage on the dive (westh2o is one of the other divers around the cameraman).

The group was exploring a “shark cleaning station” underwater — a location where sharks visit after eating to have groups of small fish clean their teeth. They didn’t see a single shark in the area, but what they did see they’ll remember for the rest of their lives.

At some point during the dive, the group began to hear the “song” of a whale (you can hear it clearly in the video starting at 30 seconds in). As the group swam toward the sound, it got louder and louder. westh2o writes,

The recording does not do justice to the actual sound. Seriously some of those sounds vibrated my chest. I didn’t realize whales had such a wide frequency of sound. Some were mid to hi frequency and some were very low.

Finally, about 3 minutes later, a large humpback whale appears, swims by at a very close distance, and then disappears into the cloudiness of the ocean. It was “the size of an underwater school bus,” westh2o says. You can see and hear the divers excitedly cheering after the unexpected sighting. 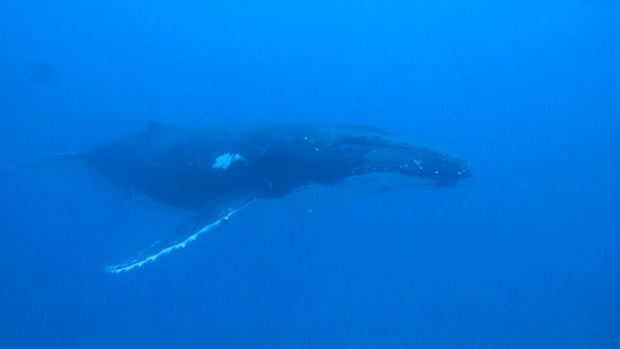 After they surfaced, the dive master who was with them revealed how rare of an event it was — of the 1,500 dives he does every year (with multiple dives per day), he only manages to see about 1 or 2 whales underwater.

If you’re ever on an underwater photography adventure and hear the sound of a singing whale getting closer and closer, get your shutter finger ready — a fantastic photo op may be just around the “corner.”

P.S. Back in 2011, we posted a beautiful video in which photographer Brian Skerry talks about finding and photographing a gigantic 45-foot-long whale.

That’s No Way to Treat a Perfectly Good Viewfinder!