The June cover of National Geographic features a photo of explorer and director James Cameron comfortably posing underwater in front of what looks to be his submarine. Obviously a composite (and a bit of a deviation from Nat Geo’s typical style) photographer Marco Grob uses the above behind the scenes video to explain both the how and the why behind this awesome photo shoot.

If you follow exploration news, the why should already be apparent. In December of 2012, Cameron took his submarine, Deepsea Challenge, to the deepest part of the ocean: the Challenger Deep — a voyage considered more dangerous by some than landing on the moon. Only two other people have ever gone down that deep before, and that expedition was attempted all the way back in the 1960s.

So Grob knew that Cameron had to be shot underwater, the only question now was how. The answer involves an iPhone test shoot, a water tank originally designed for America’s Next Top Model, and a little bit of work in Photoshop. Here’s what turned out: 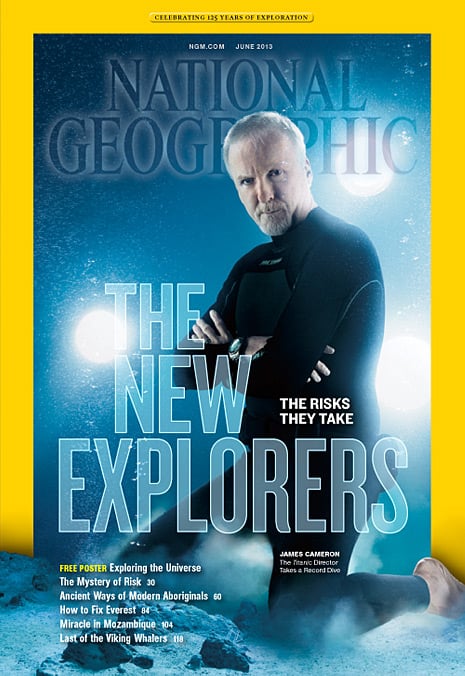 The initial idea and layout actually came together in Nat Geo Creative Director Bill Marr’s hotel room the morning of the shoot. Using an iPhone, Marr had Grob pose on the floor in all black, and then incorporated those shots into a magazine layout. It’s certainly not Nat Geo cover material, but the mock-up gave Grob a way to communicate the idea to his entire staff and, ultimately, Cameron.

We won’t spoil any more details about the shoot. Suffice it to say that once Cameron arrived and donned his wet suit, he spent the remainder of the shoot posing while holding his breath underwater. Obviously, he’s in his element. The final product was then put together in post by combining the studio shot with actual pictures of the Challenger Deep and Cameron’s submarine that were taken on the day of the fateful dive.

Check out the video at the top for the whole story and/or head over to Grob’s website to see more of his work.