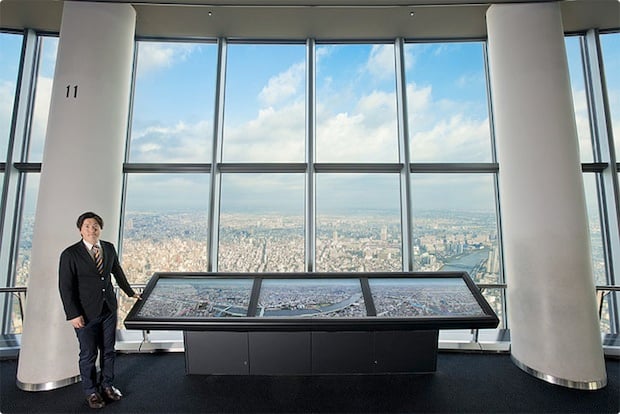 The Tokyo Skytree is a massive broadcasting tower in Sumida, Tokyo, Japan that currently holds the title of world’s tallest tower and second tallest structure. Measuring in at a completed height of 2,080 feet, the broadcasting tower — which also doubles as a restaurant and observation tower — gives visitors a stunning 360-degree view of Tokyo.

But it wasn’t enough for the folks behind the project to let people come up, gawk and take their own pictures. They decided that a view like this had to be documented professionally, 24 hours per day, 7 days per week; which is why there are 12 Nikon D3S’s equipped with Nikkor AF 35mm f/2D lenses arranged around the tower at all times, keeping tabs on the city below. 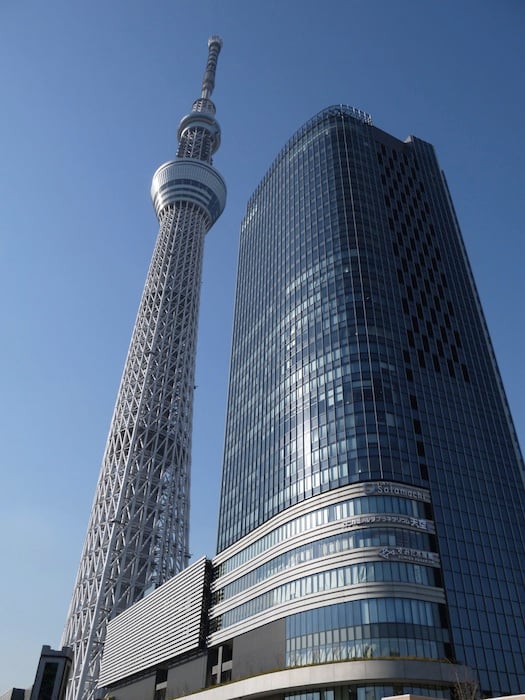 The 12-DSLR system was developed by Nomura Co. and installed on what is called the Tembo Deck approximately 1,100 feet up the tower. Encased in special housings to prevent condensation, the cameras all take a picture simultaneously every 10 minutes during the day and every hour at night. This interval can be (and often is) reduced to as little as 30 seconds between shots for special festivals or events that bear photographing.

There were many hurdles the designers had to overcome on the way to the smooth-working system they have now: from selecting a good-quality camera, to adjusting settings so that the photos from each camera would stitch together into a satisfactory panorama without noticeable cutoff points.

For the latter or those, they wound up using the D3S’s photometric system to properly expose each photo the same, whether the camera was facing the sun, shade, or somewhere in between. By selecting a point with no reflection or glare, each camera can take basically the same picture with regards to exposure and white balance.

The resulting photos are then sent out to the Tokyo Skytree server room, from which they are displayed in the tower itself and around the globe via the interactive website Skytree View (which seems to be down at the time of this writing).

Here’s a short Japanese introduction to the Skytree View website:

To learn more about the Tokyo Skytree building and the wicked cool camera system that keeps all of Tokyo on display 24/7 for the whole world to see, head over to Nikon for a full interview with the man in charge of the project, Masatoki Morito.