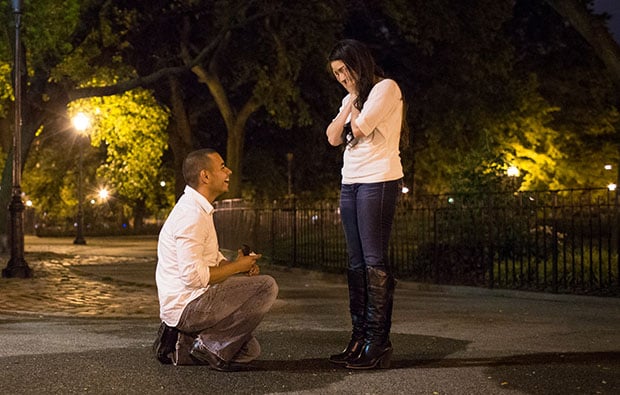 Hey everyone! I’m really excited to share a personal story with you all. This past weekend I asked my partner to marry me. After weeks of planning, the time had come to decide how I was going to capture the moment.

Unfortunately some of my colleague photographers were unavailable and so the thought of doing it myself crossed my mind. I felt ready for the challenge: photographing my own proposal! (As if it wasn’t enough to plan for the actual proposal, I now had to plan on how to capture it.)

To start, I needed to find something that’ll trigger my camera wirelessly and that was reliable and fast. Fortunately one of my buddies let me borrow his Vello IR-C1 Infrared Remote Control which he raved about. I picked it up and tested it by enabling the wireless option on the 5D Mark III. It worked perfectly and shot as fast as you can press the shutter button on the remote.

Next, I decided to use a tripod to get my camera ready for the big moment. It isn’t rare for me to carry a tripod and camera with me whenever I go into the city so she wouldn’t have any suspicions.

Finally, choosing a lens was very important. I wanted something that would allow me to capture as much light as possible since it would probably be night out and I didn’t want to sacrifice shutter speed or depth of field.

The most important factors of this all were: (1) using a DSLR of course, and (2) using a remote to trigger the camera. So I tested the remote quite a few times before the day of the proposal. I tested it indoors, outdoors, and at variable distances and it never failed.

The day finally arrived, and I carried my camera and tripod with me. We had a lovely dinner and I was originally planning to pop the question outside the restaurant. However, as we left, there were a ton of people outside for some reason, as well as an ambulance parked right in front flashing its lights.

So we walked a bit more. It was already night out, so all I could think about was finding decent lighting. I stopped and snapped a few pictures up the block from the restaurant, but the street looked kind of sketchy.

So I moved on to a nearby park. Using the excuse that I wanted to test this “cool little remote my friend had given me,” I suggested we take a walk through the park. We walked in and I was looking for a nice little quiet spot that had some sort of lighting.

There were a few light posts so it wasn’t pitch black but still a little dark. I found the perfect walkway and stopped there and got my camera all set up: 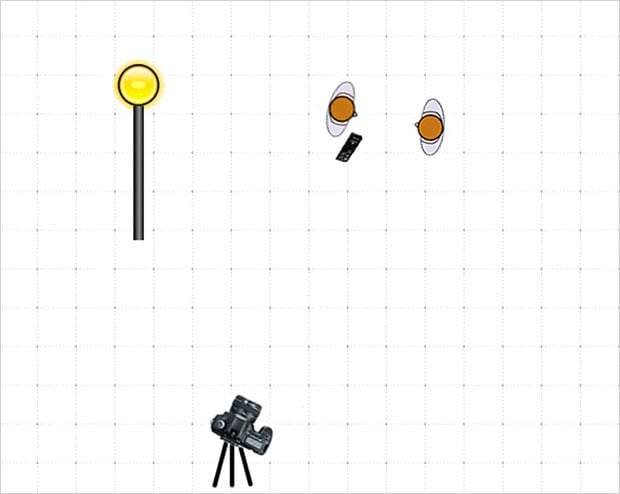 After taking a few photos of the walkway itself and showing her “how cool it looked”, I told her to stand in the photo. This is when I got my camera settings all ready. I had a f/1.4 lens and I wanted a shallow depth of field so it would look at least a bit interesting.

I set my aperture to f/2.0, which was safe enough for me just in case she moved. I bumped my ISO to 5000, which helped out a lot since it was dark — thankfully the 5D Mark III can handle high ISOs. Finally, my shutter was set to 1/40s. This was so that my shot would have the least amount of motion blur. I pre-focused on the camera and then everything was set.

Once my camera was ready, I walked into the shot a few times to get some “test” shots and waited for some people to pass us by to steal a moment alone. Once everything aligned perfectly, I got down on one knee — all while aiming the remote at the camera — to ask the her to marry me: 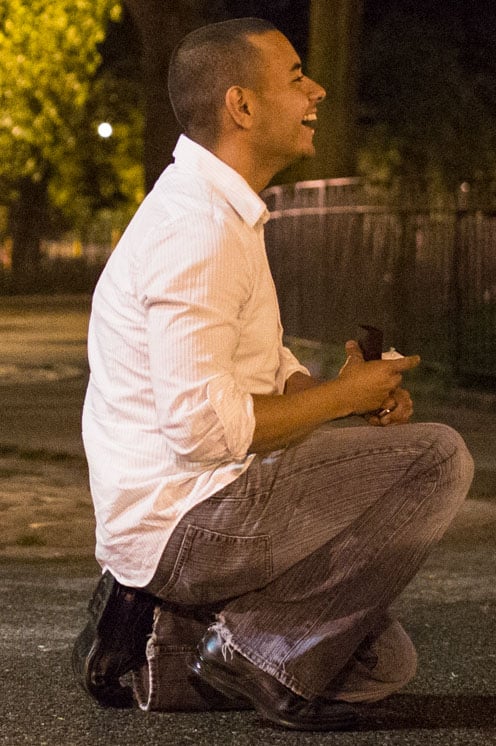 At that moment I wasn’t even thinking about the camera taking photos and just trusted that it was working. Thankfully, after all was said and done, the moment was captured perfectly and I couldn’t have asked for anything better: 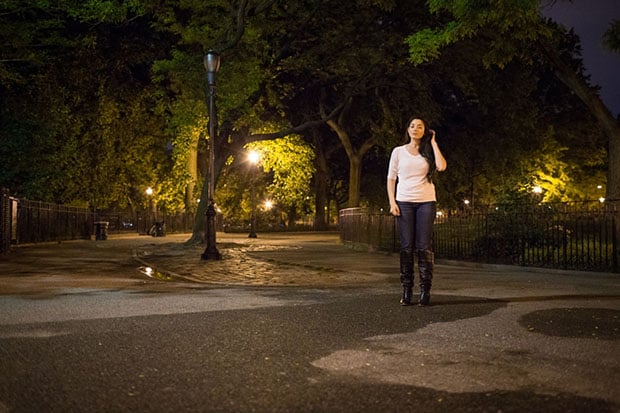 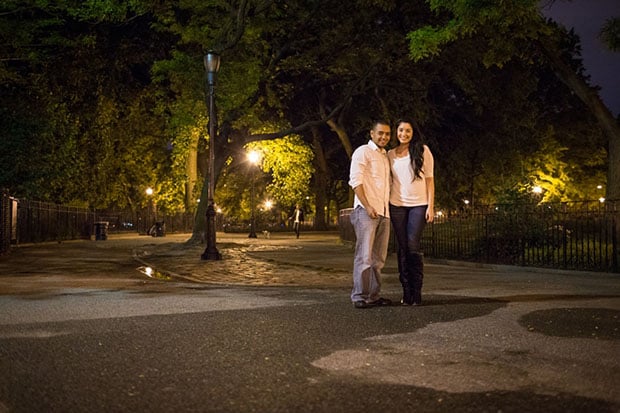 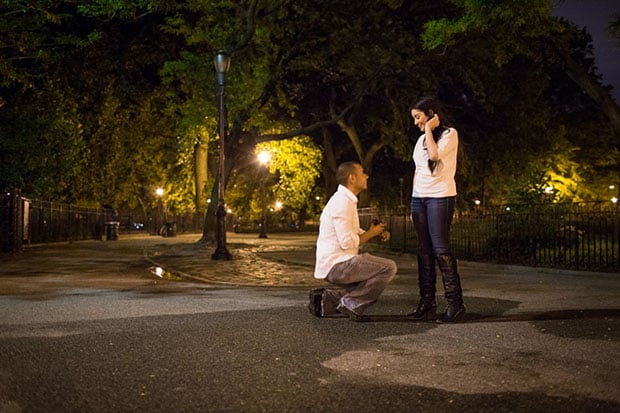 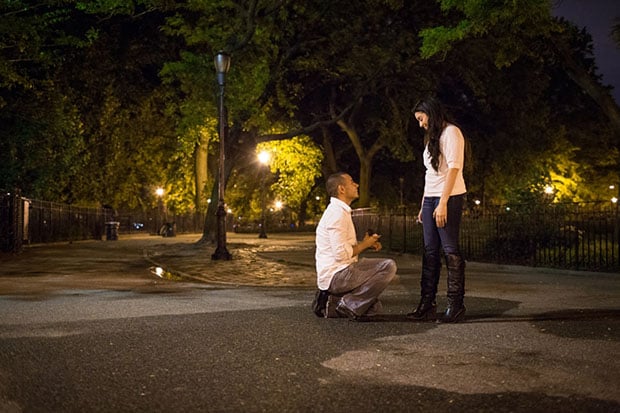 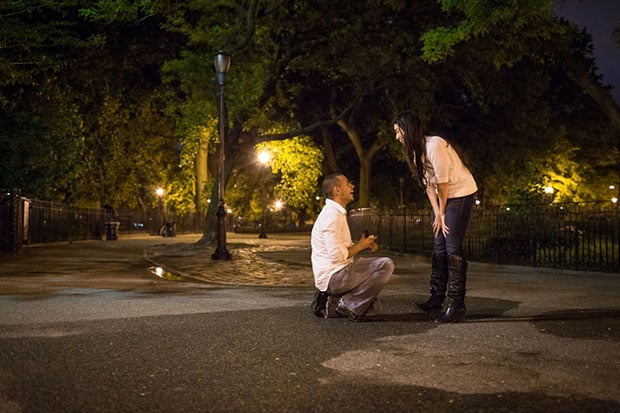 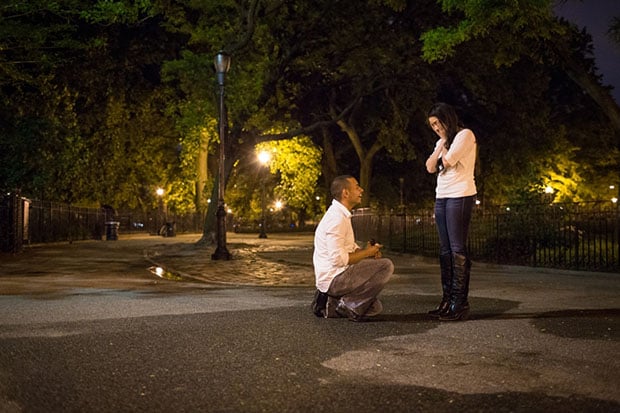 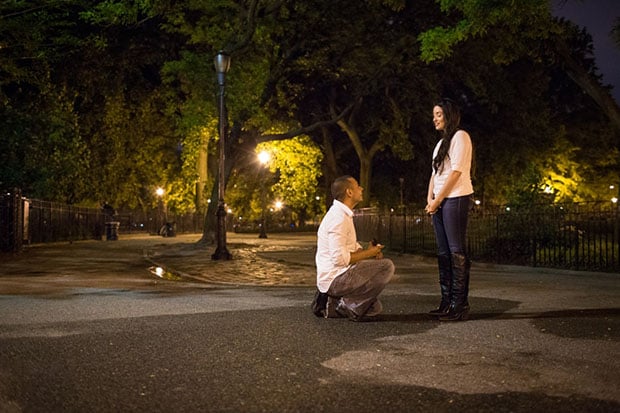 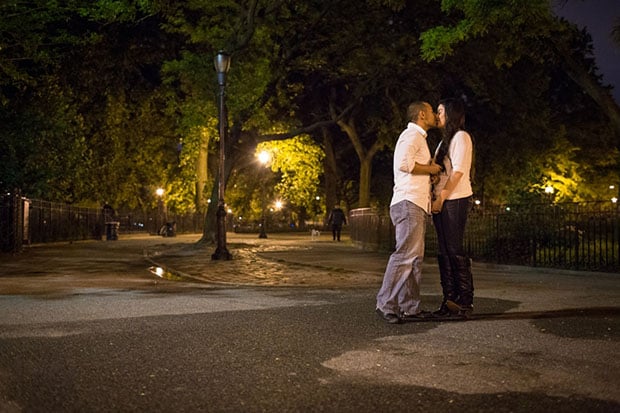 If you are a photographer like myself and are planning to propose soon, you may want to give this a shot. If you’re not a photographer, you can still do it yourself, or you can hire a professional to capture this special moment for you without you having to worry about the important factors that made this possible.

I had thought of capturing a video instead, but I’m glad we took the photos. Now instead of showing off some video and moving on, we can show one or two photographs and tell the story ourselves. Remember: “A picture is worth a thousand words!”

All in all, my main point is, this was such a special moment for us and for most people. I highly recommend you find someway or someone to document this moment in your life.

About the author: Richard B Flores is a photographer based in Bayonne, New Jersey. Visit his website here and his blog here. You can also connect with him on Facebook and Twitter. This article originally appeared here.

Google Releases Satellite Pics of Moore, Oklahoma Before and After the Tornado