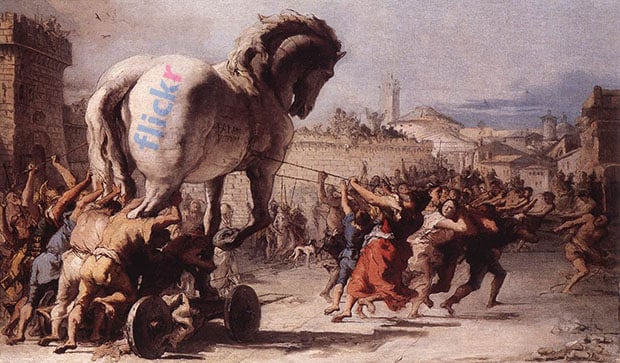 Yesterday, Flickr announced new changes that included a free, ad-supported terabyte of storage for all Flickr users. When I heard the news, I believed that Flickr Pro account users would be given an opportunity to stay Pro going forward. I thought this because this, in fact, was my understanding of what was told to me by a Flickr Senior Manager in a briefing earlier in the morning before the announcement.

Unfortunately, I found out the hard way yesterday that this is not the case.

My Pro account was set to expire in 2012 but I used another “gift” certificate from Flickr. This time it was a gift certificate that they handed out to all photowalkers on a big Flickr San Francisco photowalk.

Because I applied this 6 months of free pro that Flickr gave to every photowalker at the SF photowalk, my account was not set up to recurring Pro in January of 2013.

So, after paying consistently for two years at a time of Pro on Flickr for years, my Flickr Pro account is now not eligible for renewal, and I’m not grandfathered into the Pro Flickr service.

I wish I’d never accepted the Flickr trojan horse “gift” of 6 months of free Pro at the San Francisco Photowalk. If I’d not accepted it then, I could be grandfathered as a paid Pro account along with everyone else. As it stands now, my Pro account will expire in July of this year with no way to renew it.

Yesterday, I thought Flickr was doing a very fair thing by allowing Pro accounts to continue on as Pros by paying $24.95 per year. I’ve invested thousands of hours uploading over 80,000 photos to Flickr with the understanding that I was purchasing unlimited photo storage.

Now, today, I’ve been screwed out of my deal because I made the mistake of attending Flickr’s San Francisco photowalk and redeeming a 6 months certificate for free Pro that they handed out.

This is just wrong and also contrary to what I was told earlier today.

Flickr should allow all Pro account users the ability to keep their Pro status, and not discriminate against those of us who happened to attend their San Francisco Photowalk last year.

There is a post on Flickr’s help forum about this here, where a Flickr staffer confirms that only some of Flickr Pro accounts are eligible for renewal.

I’m assuming that Flickr will sort some of this out before my Pro account expires in July, but I’m certainly concerned that Flickr would so easily take away Pro accounts from long time members who have supported the site with paid Pro accounts over the years. To offer someone unlimited uploads only to renege on that promise later for attending one of their photowalks feels wrong to me.

Thank you Flickr for fixing this and in less than 24 hours! Now that’s customer service!

A Time-Lapse and Footage of the Tornado That Struck Oklahoma

Add Another Dimension to Your Photos with 3D Printing