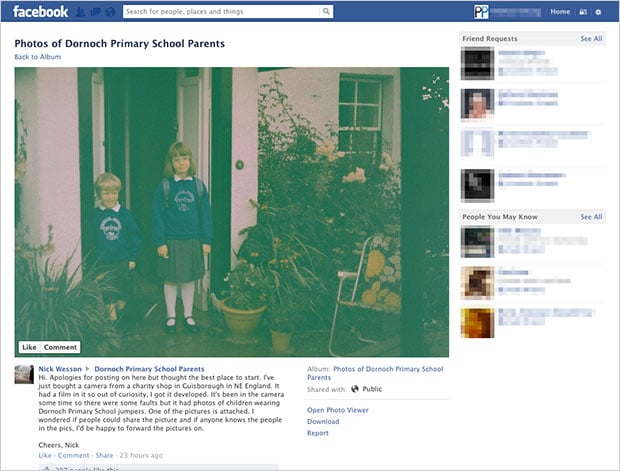 Photographer Nick Wesson experienced the power of the Internet first hand this past weekend after he managed to track down the subject of a photo he found in a thrift store camera — in a matter of hours.

Wesson is a photographer and camera collector based in North East England. On Saturday, he was browsing through a local thrift shop when he came across a Pentax Spotmatic with a roll of undeveloped film still loaded in the camera.

After purchasing the camera, curiosity got the best of him, so Wesson removed the film and t ook it to his local Asda (a super market chain owned by Walmart) to have it developed.

When the film was returned, most of the shots were ruined by light leaks and deterioration, but a few of them showed pictures that had survived the years.

A couple of them showed a young boy and girl. Upon closer inspection, Wesson noticed that they were both wearing sweaters that read “Dornoch Pirmary School”: 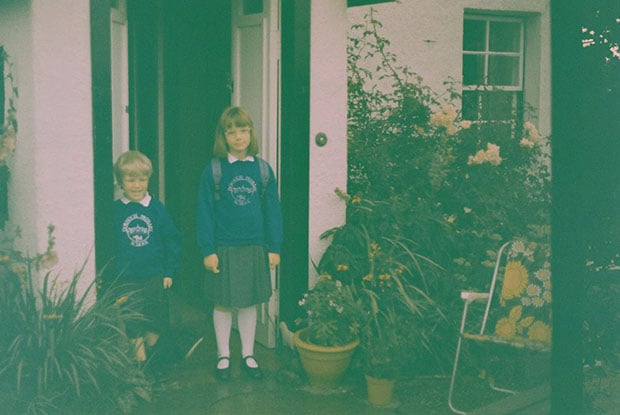 Dornoch is a school in the Scottish Highlands — about 7 hours and 356 miles away from Wesson’s home and the thrift shop where the camera was discovered.

Poking around on the web, Wesson found a Facebook page for Dornoch Primary School that was set up by parents of Dornoch students. The page only has 69 “Likes,” but Wesson went ahead and posted the photograph anyway. His note read:

Hi. Apologies for posting on here but thought the best place to start. I’ve just bought a camera from a charity shop in Guisborough in NE England. It had a film in it so out of curiosity, I got it developed. It’s been in the camera some time so there were some faults but it had photos of children wearing Dornoch Primary School jumpers. One of the pictures is attached. I wondered if people could share the picture and if anyone knows the people in the pics, I’d be happy to forward the pictures on.

Two hours after the post was made, a woman named Sarah Richardson left a couple of comments on the post. It turns out the little girl in the photograph is all grown up now!

Hi Nick, thanks very much for posting on here, I have absolutely no idea how the photos ended up in a charity shop in England! I can’t seem to find your Facebook profile on here but if you PM me I can give you a forwarding address for the photos. It just shows you the power of Facebook- 2 hours and you found the people concerned! Thanks again! [#] 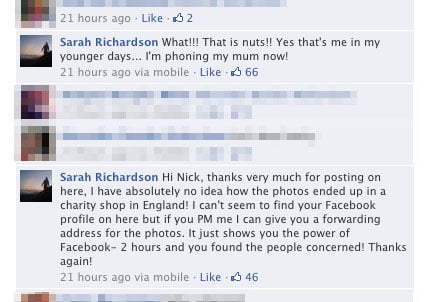 Wesson tells us that he’s now in touch with Richardson and is planning to investigate how the camera ended up so far from its original home.

Beware the Coming War Against Personal Photography and Video