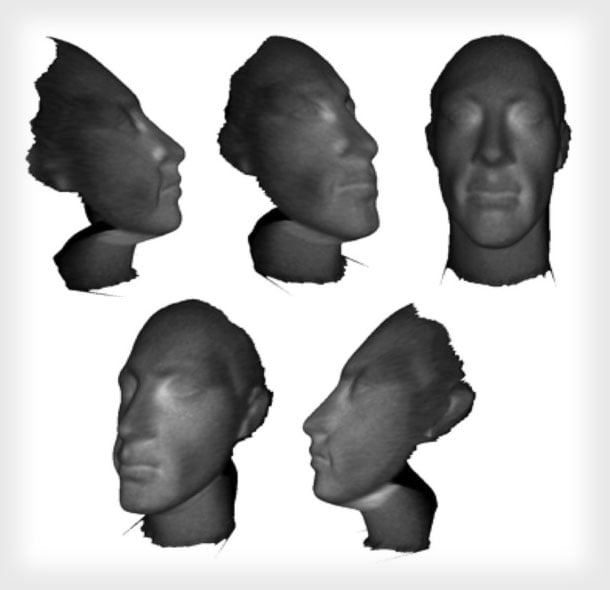 A team of researchers at the University of Glasgow’s School of Physics and Astronomy just published a paper in Science that details how they managed to use an altered style of “ghost imaging” photography to create accurate three-dimensional images.

While a normal camera uses a many megapixel sensor to collect location and intensity information about incoming light, creating a picture in the process, ghost imaging creates an image by collecting information about the light that didn’t hit the object.

Usually this process still involves a camera. Scientists split a laser beam, creating a paired light source, and place a traditional camera in the path of one beam and the subject with a single-pixel sensor nearby in the path of the other. The sensor gauges the intensity of light bouncing off of the subject, and the camera then measures the difference in intensity between that light and the beam it receives, creating an image from the results. 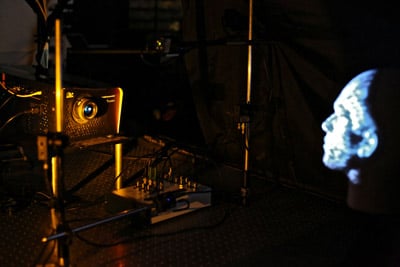 In the case of the Glasgow team, however, they’ve done away with the camera altogether, and are instead using four single-pixel sensors to create a three-dimensional image. For their setup (seen above) they use a projector to shine computer generated black-and-white patterns onto the subject — in this case a mannequin head — and then rely on four detectors (one above, one below, and one to each side of the projector) to determine the intensity of the light bouncing off.

The computer then compares each black-and-white pattern to the intensity recorded by each detector, and overlays the results to create a picture. It’s the same as if you replaced the projector with a traditional camera, and the four sensors with light bulbs, only the light is moving in the opposite direction.

Each detector generates an image with different lights and shadows, and by combining the four shade profiles using the “shape from shade” technique, they create an accurate 3D representation. Here’s a video put together by the University that walks you through the complex process of generating a 3D image without using a camera:

For now the images are crude, but the advantages of using single-pixel detectors over multi-megapixel cameras are numerous. Beyond the surveillance uses that many ghost imaging proponents have suggested, single-pixel sensors can be made to detect wavelengths far outside the abilities of our eyes or traditional image sensors.

“It could be used to look for the telltale gases which leak from the ground where oil can be found, for example, or it could be tuned into the terahertz range to probe just below the skin to search for tumours or other medical conditions,” said Matthew Edgar, a research assistant who spoke with Phys.org. “We plan to continue working on the system and perhaps working with commercial partners to bring a version to market in the future.”

For more information, read the full scientific article published in Science or head over to The University of Glasgow website to see their writeup on the project.

The Jarvie Window: Photographing Faces Through a Ring Flash