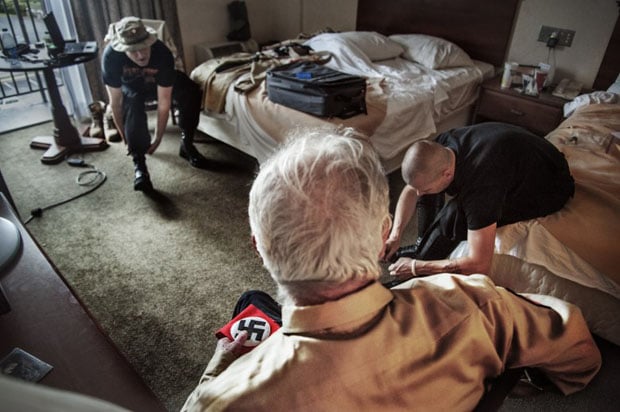 The National Socialist Movement held their 2013 national convention in Atlanta, Georgia, protesting undocumented immigration and contemporary political policies. The NSM boasts of being the nation’s largest “white civil rights groups” and aligns itself with other like-minded individuals across the nation. Spanning across the majority of the 50 states, the NSM retains its presence through regional and local leaders.

Here’s a look at the convention and how I documented it through photographs earlier this year.


It’s hard to really say how this project began, as if there was some intangible moment along the way that marked the beginning. I started toying with the idea of developing a type of project on this subject on and off in the later part of 2011.

I had just started the Photojournalism and Documentary Photography program at the International Center of Photography in NYC and I knew that for the last 5 months of the program I would be focusing on developing a long term project.

Around the same time that the program was getting into gear, Arizona was preparing to present its Senate Bill 1070, which drove the issue of immigration to the front of the national debate.

SB1070 was the talking point for much of the country based on some of its controversial stipulations allowing local police forces to act as immigration enforcement — allowing them to use their discretion in requiring individuals who they deemed as possibly undocumented to show citizenship papers. It immediately peaked my interest, and I kept up with the bill as it moved its way through the state legislature.

At this point in time I had always been interested in the sort of “political right” and had envisioned it being some sort of transcendental body of work like Christopher Morris’ “Americans”.

After doing my research and fully immersing myself in the idea of the project, I began to reach out to several groups. After contacting group after group after group, and several months of emails and phone calls, I was granted an interview with one of the, at the time, regional directors of the National Socialist Movement. All in all it took about 4 months or so before I actually began shooting.

After conducting the interview, it was very difficult for me to get the access I needed to make the pictures I wanted. The interview was the only material I had until 2 months later when I was invited to the NSM’s national convention that was held annually in a different state each year.

2012’s national convention was held in Kentucky, and so I flew out with the same regional director that I conducted the interview with, among other members, and spent 3 days there in Louisville, photographing the banquet, rally, and the “in betweens” at the hotel. What I walked away with was a short multimedia piece.

Although I was content with what I walked away with, I knew it would take a much greater period of time to put to rest many of the wary looks I was getting in Kentucky. After keeping in contact with many of the members and subsequently completing another portfolio of some of the border patrol operations that the NSM participates in independently, I was again invited this time around for the 2013 convention in Atlanta, Georgia.

Immediately upon my arrival, the air was not as thick as Kentucky. I had some rapport built up with many of the members, including their ‘commander’, I had met at the last convention and during my time with their border guard unit in Arizona. Looking back on my previous bodies of work it’s obvious that the time that it took guided me to the place I needed to be to really only scratch the surface at the pictures I wanted to make, and the Atlanta convention is a subtle reminder of that to me.

The images that I walked away with aren’t home runs, but they’re definitely a step up above the generic rally and swastika pictures that are rampant among projects like this. Although I know my project is not where I want it to be in the least, I know that I’m making progress.

About the author: John Milano is a photographer based in New York who’s currently freelancing for Newsday. He is passionate about social documentary work as well as conflict photography. Visit his website here.