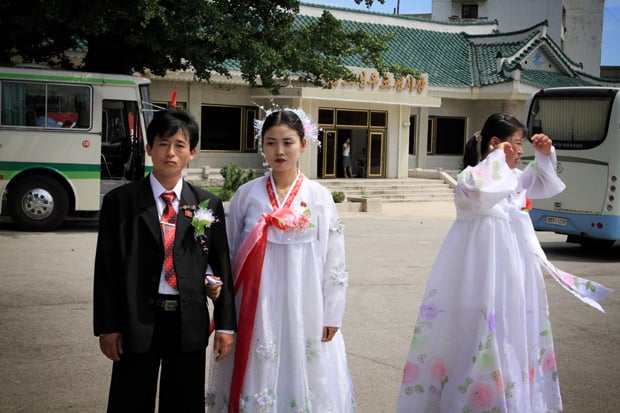 Tensions are running high again on the Korean peninsula. As international observers watch closely for what move the North will play next, I thought it might be a good time to revisit some of my work from photographing in North Korea, undercover on-assignment, for the Globe & Mail in 2009.

This post is an extract from an article I contributed to the Digital Journalist the same year, recounting some of my experiences whilst photographing in this reclusive state. It was an experience I shall never forget…

Last month, I got a call from the Globe & Mail‘s Asia correspondent, Mark MacKinnon, asking me if I was free in early September for a shoot. “Sure,” I said. I had been working with Mark a lot recently and was keen to work with him again.

“I’m thinking of going to North Korea,” he said.

As our bus trundled across the bridge over the Yalu River that separates China and North Korea, my initial nonchalance had well and truly disappeared as we slowly approached the most closed nation on earth.

I was nervous because both Mark and I were posing as tourists, entering a country that was not exactly friendly to the foreign press. Immediately after the well-publicized rescue by former U.S. President Bill Clinton of journalists Euna Lee and Laura Ling, who had been caught illegally entering the country, this was maybe not the best time to be trying to sneak into North Korea.

With Mark’s passport indicating his journalist credentials hidden (replaced by one with no such indications) and my camera broken up into as many parts as possible and spread around my person, we actually didn’t raise too many eyebrows as we quietly slipped onto a bus packed with Chinese tourists.

I didn’t know what to expect before I entered the country. I had done my research, reading articles and looking at previously taken images; however, there was so little information available that I decided to just be as open as possible to what I saw, found and felt while in the country.

For the whole time we were there, our tour guide and government minder, both assigned to watch over us, accompanied Mark and me. I was initially very cautious about taking photos and capturing video footage of this little-seen place. As soon as we crossed the border, I started to reassemble my camera and tried to look as much like an inquisitive tourist as possible.

Our first stop was Sinuiju city, just across the border from China, where we visited a statue of the “eternal leader,” Kim Il-Sung (this was to be the first of many). As I took my first few tentative shots of the statue, all appeared well. No one was watching me and no one was telling me to stop. The pedestrians walking nearby, beyond the pristine park in which the statue was located, quickly caught my attention. As I turned to photograph them, I managed to take a few frames before my minder appeared from nowhere and firmly cautioned me to “please, only photograph the statue.”

That afternoon we took the train from the border to the capital, Pyongyang. I again got into a little trouble when I photographed a train station attendant, a no-no apparently, and when I tried to photograph outside the window of our moving train. Both times, I was sternly but politely reminded that it was not me who dictated who or what could be photographed.

I began to become paranoid that they would find out what Mark and I were doing there. Rumors from guidebooks and fellow travelers hinted that our hotel rooms were almost certainly bugged, although there was no way to tell for sure.

As we traveled around the country, our minder and guide constantly quizzed us, both obviously “assigned” to find out a little more about who we were and why we were visiting, searching for any holes they could find in our stories. A slip could have gotten us into serious trouble.

One day, we visited the International Friendship Exhibition, a huge exhibition of gifts including armored cars, various decorative guns, a polar bear skin and a stuffed crocodile. The international community had given them all to Kim Il-Sung and Kim Jong-Il as presents.

As we approached the small cabinet that held gifts from Britain, our museum guide turned to me and pointed out a decorative plate with a picture of London’s Tower Bridge on the front. “What do you think of this plate?” she casually asked.

“It’s … er … very nice. That bridge is very famous in our country,” I replied.

“When was it built?” she said suddenly.

Her change in tone and fixing of eyes with mine quickly turned this situation into an obvious spot quiz. I started to regret dropping history classes at the earliest possible opportunity at school.

“About a hundred years ago?” I haphazardly guessed, obviously not knowing the answer.

“You don’t know!” she scoffed. “How can you not know? You just said it was very famous in your country!”

I had failed the test miserably and to top it all off I was told later that I “didn’t even look British.” I was becoming more and more paranoid by the second.

Later, however, I seemed to redeem myself after I casually mentioned I liked science. This provided another spot-quiz opportunity for our guide.

“What’s a vacuum?” she randomly blurted out.

“I beg you pardon?” I asked, thinking I had misheard.

A disappointed “hmph” was the only reply I heard to that question. Suspicion (of what exactly is unknown, in this circumstance) was relieved temporarily.

For the majority of our time in the country, Mark and I were separated from other travelers and even given our own 15-seater minivan that whisked us from site to site. After the first day or two, things started to change in our guides’ attitudes towards me photographing. Trying to pose as much like a tourist seemed to be paying off as they relaxed and rarely stopped me. I sat at the back of our minivan out of their vision and snapped away at the countryside that had been previously forbidden on the train. I seized upon their new attitude and boldly photographed away.

From our four days within the country, it was almost impossible to get close to the people to photograph. As much as I would have liked to, getting close to the everyday person proved to be almost impossible. Hence, my photographs from this journey have a sense of isolation about them. It is an isolation probably born from my own feelings while being there. People are dwarfed against the mighty, imposing communist-era architecture, small and insignificant against the overbearing size of the buildings.

For me, my images from this trip have raised more questions than answers. This isn’t a problem for me, but it does not help as much as I would like it to in offering answers in a photojournalistic sense. I hope that reading between the lines and peering through the cracks of these images, they will offer brief glimpses of life in this mysterious place and conjure clues for the viewer.

Traveling to North Korea was like stepping back in time to the Cold War. It’s a time that just doesn’t exist anywhere else on Earth anymore. How long it will remain like this is truly an unknown.