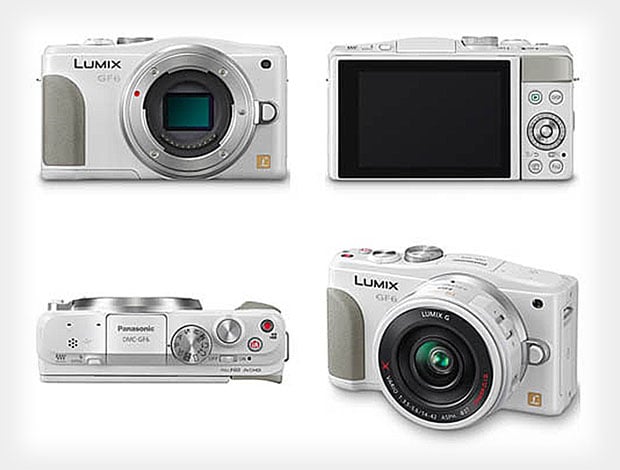 Panasonic is expected to officially announce its new GF6 Micro Four Thirds camera tomorrow, but the camera has pretty much been outed already thanks to major leaks. Last week a review of the camera made a brief appearance on the Web, and today official press photos and specs were leaked as well.


The photos show a white version of the GF6 with its new mode dial and a new 1.04-million-dot 180-degree tilting LCD screen on the back.

The camera will have the same 16-megapixel sensor as the current Panasonic GX1, backed by a new Venus processing engine. ISO goes from 160-12800, there’s a faster startup time, and continuous shooting speed is a snappy 4.2 frames per second.

There’s a new “two-dimensional” noise reduction system for cleaner shots at higher ISOs. Further aiding low light shooting is a new low light focusing system for getting a lock on your subjects in the dark.

The GF6 will reportedly be available starting on April 24th for a price of around $680 when bundled with a new 14-42mm kit lens. Stay tuned for the official announcement tomorrow and higher-resolution product photos.