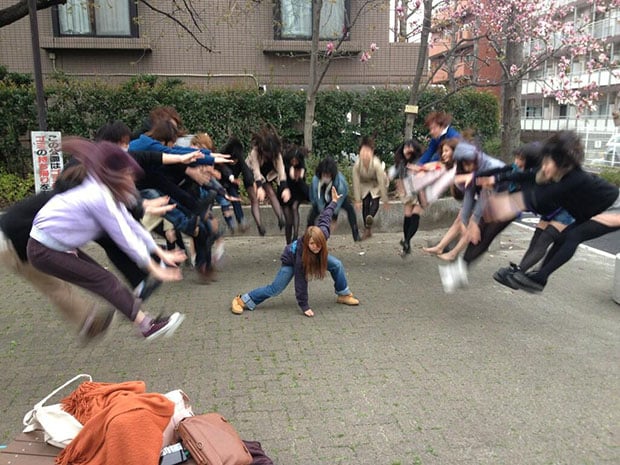 There’s a humorous new photography meme emerging from Japan. Students in the country are shooting photos that look like they’re ‘Kamehameha’ scenes from the popular manga and anime franchise Dragon Ball.

In each shot, one participant poses as a character exploding with energy, while one or more other subjects pretends to be blown away by the force of the blast. As with all of the popular memes that have emerged in recent years, participants are jumping onboard by shooting their own photos and then sharing them on the web.


The photograph above was shot by Tokyo student named Ryo Ichikawa.

The technique behind the photographs is simple enough: just time the shot so that you capture the “flying” subjects jumping up and consorting their body into an ‘L’ or sideways ‘V’ shape (try touching your toes in midair). In the resulting photo you’ll look like you’re flying backwards (it helps if you can get some motion blur in the shot).

This new meme is likely due to the fact that a new Dragon Ball movie titled Dragon Ball Z: Battle of Gods is set to hit theaters at the end of this month. There doesn’t seem to be a consensus yet on what this new fad is called, but “kamehamehaing” seems like a likely candidate.

(via Kotaku via Laughing Squid)