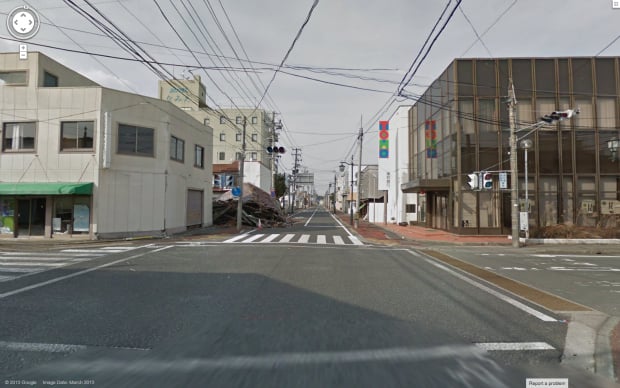 Due to the tragic Great East Japan Earthquake and the tsunami and nuclear disaster that it caused, the 21,000 residents of Namie-machi, Fukushima, Japan had to evacuate their homes. Even now, a little over two years later, the residual radiation makes it impossible for those former residents to return to the homes and businesses they were forced to abandon.

Still, many would like to see what has become of their town in the intervening years, and so Google teamed up Namie-machi mayor Tamotsu Baba to make that wish come true. As of yesterday, the displaced residents of Namie-machi (along with the rest of us) can tour the entire nuclear ghost town digitally.

Here are a few areas you can browse both inside and outside of town:

Traveling around the city — with its beached fishing boats, collapsed homes and deserted eateries — is certainly eerie, but Mayor Baba feels the pictures are an important reminder. A reminder to the residents of the home they hope to one day re-inhabit, and a reminder to the rest of us of the long-lasting effects of the now two-year-old tragedy.