Photographer Noah Kalina’s Everyday project features one photo of his face every day, and has been running since January 11, 2000. Kalina uploaded time-lapse videos created using the photos in 2006 and 2012, and both videos quickly went viral online. Not only did they amass millions of views, but they sparked a new phenomenon as well, as people around the world started snapping daily photos of their own faces and uploading similar videos to the web.

The video above is one that uses the same idea popularized by Kalina, except it’s very different from the rest (warning: it’s a bit disturbing).


Uploaded by YouTube user fero061982 this past Monday, the video is titled “One photo a day in the worst year of my life.” 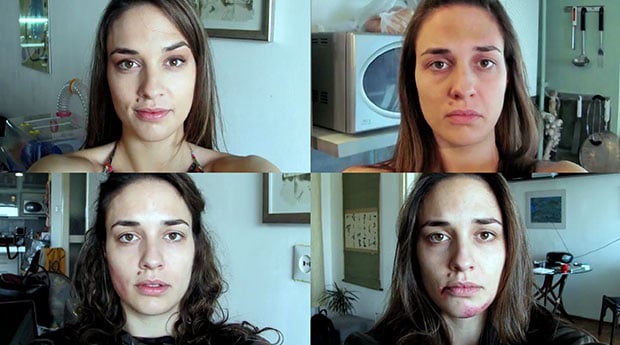 It starts out like all the other photo-a-day projects: we see a woman who apparently faithfully snapped one mug shot each day. As the video progresses, however, we start noticing that something is off. Bruises begin to appear and disappear from the woman’s face, with the injuries becoming progressively more serious.

At the end, we discover that the whole thing is actually a Croatian public service announcement that’s meant to draw attention to the widespread problem of domestic violence. The sign held up at the end reads: “Help me, I do not know if I can wait for tomorrow.”

No one was actually hurt in the making of the photographs and video (all the injuries you see were created with makeup), and the video is simply one that takes advantage of an online fad/meme to make a powerful point.