Rumors that Canon has a smaller DSLR on the way gained a big boost this morning when Best Buy leaked the camera’s product page, complete with a detailed spec list. The camera — currently making the rumor rounds under the name “EOS 100D” but labeled EOS-b on the leaked page — is rumored to make official landfall on either March 21st or 22nd alongside another new EOS.

Spec wise, it looks like the majority of what we had heard previously holds up. The new arrival will come bearing an 18MP APS-C sensor, DIGIC 5 processor, 3-inch 1.04M dot touchscreen, 9-point AF system, Movie Servo AF, 4fps burst mode (down from the 6 leaked previously), and an ISO range of 100 to 25,600. 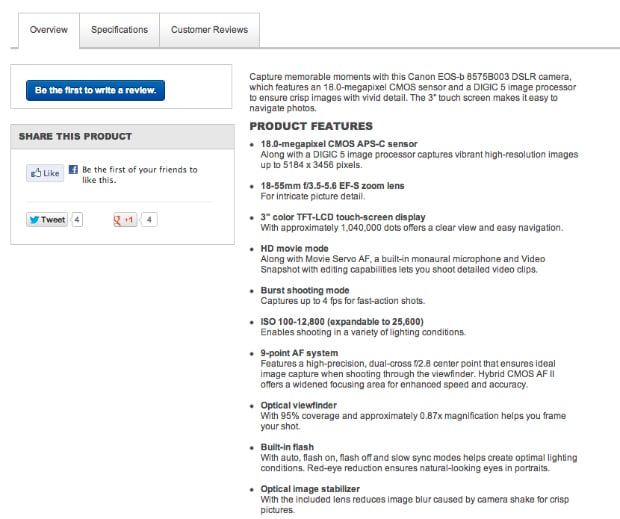 Although it’s entirely possible the specs are a placeholder for the official release at the end of this week, the weight of the camera points to the fact that this will, indeed, be the “smaller” DLSR we’ve all been hearing about. At 13.1oz, the EOS-b (or 100D) weighs in a full 5oz lighter than the T4i — although that’s still 3.9oz heavier than the EOS-M.

By the looks of it, you’ll be able to get the new camera (whatever it’ll be called) complete with an EF-S 18-55mm IS kit lens for $800. As of this writing, you can still visit the product page on Best Buy’s website and see the specs for yourself, but we don’t expect that to be the case much longer.

Update: As expected, the page was taken down shortly after we published this post.