Photographer Samuel Orr shot 40,000 photographs over 15 months (between 2006-2008) to create the time-lapse video seen above. It shows the view he had from his front window at the time, from his home in a wooded region just outside Bloomington, Indiana. The short is titled, “Forest Year.”


After moving to the location, Orr practiced his time-lapse technique with a number of short projects. He then began thinking about doing a more ambitious project that would capture the passing of months and the changing of seasons.

He needed his main cameras for other work, so he took his spare Nikon Coolpix 5400 (already considered outdated in 2006), and fixed it to a tripod pointing out his window. The camera’s memory card slot door was broken, and the LCD was the size of a postage stamp, but he still managed to successfully shoot stills with it on a stationary tripod for a little over 15 months. 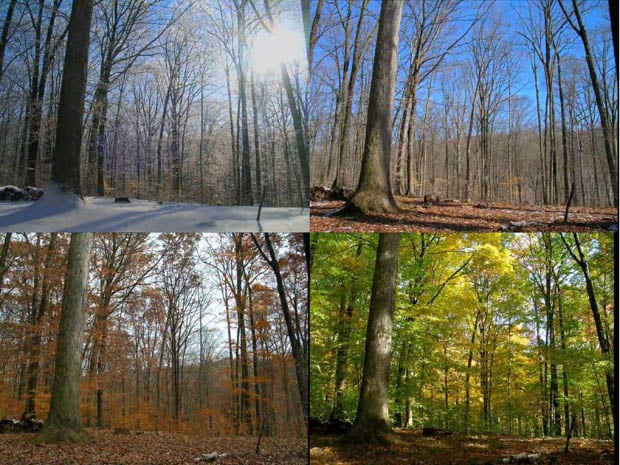 After shooting 40,000 photographs, he turned each group of key moments into 5-8 second time-lapse films. He then blended these short films into the finished video above at 30 frames per second. Finally, he added background sounds characteristic of each period to give the viewing experience an added dimension.

I tried to put in wildlife songs and calls appropriate to the season. For instance, the honking during what is late winter are Sandhill Cranes, which used a migratory flyway that passed directly overhead. Many of the calls were recorded on sight, others were from elsewhere in Indiana. Animals heard include migratory songbirds, spring peepers, tree frogs, cicadas (periodical and annual), turkeys, coyotes, elk, and wolves. While there are no wild wolves or elk native to Indiana anymore, but for hunting long ago they would still roam the surrounding hills. [#]

We feature a very different project by Orr yesterday: the passing of a day in NYC in 100,000+ photos.

Image credit: Video and photographs by Samuel Orr and used with permission