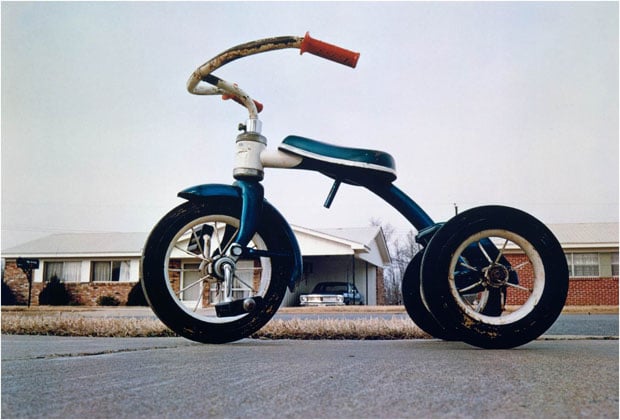 William Eggleston didn’t invent color photography, but his landmark 1976 exhibition at the Museum of Modern Art gave it dignity, and began the four-decade process of acceptance by curators and collectors as an art form to rival oil painting.

Shot in 1970, “Untitled (Memphis)” – shown above – was one of the 75 photos in the show, and also featured on the cover of the catalogue. Now it’s included in a retrospective of Eggleston’s early work at the Metropolitan.

To lend Eggleston’s work legitimacy – at a time when even black-and-white ‘art’ photography was still deemed suspect by many – the pioneering MoMA curator John Szarkowski wrote about the photos in language that would appeal to modern art aficionados. (In his phrasing, the images have “a lean, monocular intentness that fixes the subject as sharply as if it were recalled from eidetic memory.”)

It was a smart move, especially given that he couldn’t appeal to ‘craft’, as photography curators reflexively did in those days: Unlike the hand-processed black-and-white prints of Edward Steichen or Ansel Adams, these pictures were made in a lab using the dye-transfer technique developed for commercial advertising.

There was nothing artsy about their production. It was simply the best method for Eggleston to achieve the ultra-saturated effect he sought – and it was just what photography needed to become truly modern.

Eggleston’s ’70s sacrilege led to today’s epic c-prints by masters such as Andreas Gursky. Paradoxically photographers had to be unpainterly – appropriating industrial processes – in order for the public to see photography as the equal of painting.