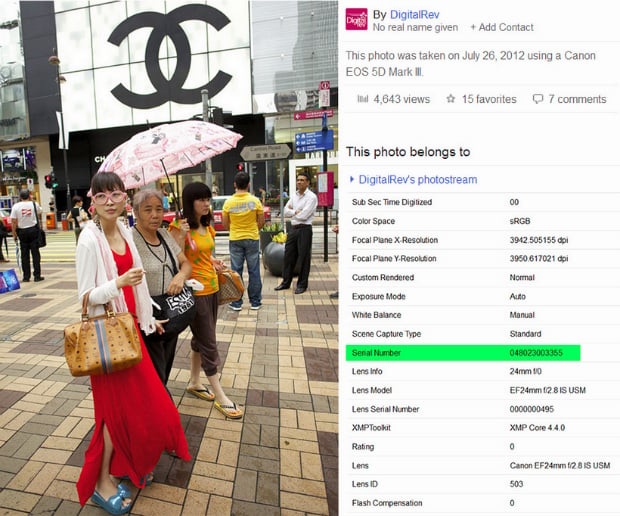 We already know that buying ‘new’ camera gear online is no guarantee that you’re actually getting something new. Even when the source seems to be trustworthy (ala Amazon), you just never know.

So when photographer Rob Dunlop stumbled onto StolenCameraFinder, he chose to look into something. Several months earlier he had received one of the two 5D Mark III’s he ordered from DigitalRev in the wrong box, so he went online and plugged in his serial number. As it turns out, his camera had been used by none other than Kai in one of DigitalRev’s YouTube videos. 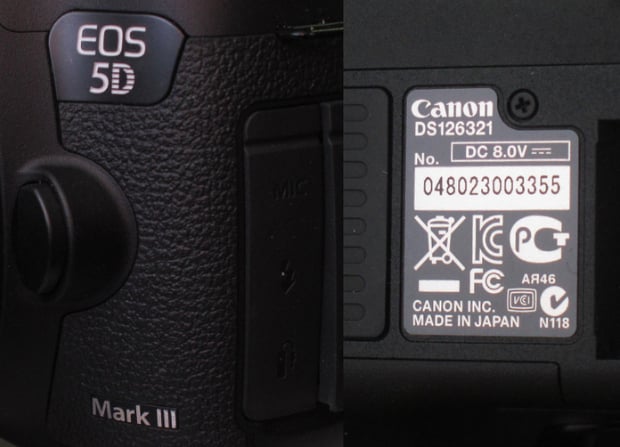 StolenCameraFinder tracks down your camera’s new owner by searching for its serial number in photo file data online. When Dunlop typed his serial into the website, a few photos from DigitalRev’s Flickr stream immediately came up. Here’s the video the camera was used in:

Once he discovered where his camera had been (and the manner in which it was handled…) he immediately posted his findings on his blog and got in touch with DigitalRev. They, in turn, responded with this:

DigitalRev TV’s products for review come from a number of sources including press units, display units from distributors, partners, rental companies as well as units donated by or borrowed from the DigitalRev Online Store. The practice in the past is that if we have to loan something to DigtialRev TV, it is either written off (and thereby become DRTV’s equipment) or sold to third party companies for clearance afterwards. It is definitely not DigitalRev Online Store’s policy to allow any loan product to DRTV to be recirculated back into the store’s logistic flow, especially as it doesn’t make sense to risk damaging our reputation when we could have sold them to third party companies at cost with the conditions of the product clearly stated. Besides I do know for a fact that DRTV team has access to a total of four 5D Mark III cameras… It is unclear at the moment as why DRTV was handed this camera, and why it was returned to inventory.

We’ve contacted DigitalRev ourselves and been told much the same thing: they are in the midst of a serious internal investigation into the matter, it’s not their policy to sell used products, and this is an isolated incident.

Here is their response:

I’m heading the marketing and PR for DigitalRev Online Store. Thank you for your patience while we conduct our internal audit.

As mentioned in my colleague’s last email, the equipment used by DRTV’s production team comes from a number of sources such as: press units, display units from distributors, partners, rental companies as well as units donated by or borrowed from the DigitalRev Online Store. I would like to emphasise that it is not our policy to sell equipment that was lent to DRTV in our Online Store. How it usually works is that the equipment used would be either sold to third party companies or written off as DRTV equipment.

During the last couple of days, we have looked into logs as well as our sample photos to see if there have been any violation of the policy. We now know that at the time of the production, the DRTV team was only assigned one 5D Mark III camera (for Lok). Although Kai does have his own 5D Mark III, he sometimes forgets to bring it. When the extra 5D Mark III camera was lent to DRTV, it was at a point decided it will be kept by DRTV for future use instead of returning it to the online store. However we discovered that the supervisor of the logistic department, realising the camera was out of stock, decided to recall that camera from DRTV without the acknowledgement of the management.

We have an internal performance indicator called CED Score (CED stands for “Customer Expect Delivery by”), and it is used across the logistic department. If a customer’s order gets delayed, the CED score is negatively affected. This performance indicator is directly linked to the logistic team’s annual performance appraisal, so everyone works very hard to make sure orders get delivered to customers quickly. When the 5D camera went out of stock on that day, the supervisor decided to get one back from DRTV despite that the camera has been used in two videos. One less delayed order means higher CED score, and little did the management know that a performance indicator designed to encourage best shopping experience has created a very negative one. Although the camera had only been used to take about two dozen shots, I agree that the way it was used on the YouTube show is definitely not something you should witness. From the audit, we have also identified two other similar violations of policy. One of the other two customers have contacted us after reading your story, and we are going to contact the other one today or early tomorrow to recall their cameras.

Although what we have discovered so far are a few isolated violations of internal policy, we take this matter extremely seriously. Warnings have been issued to the persons who violated the policy, but more important we have made it the management’s top priority to make sure more trainings are provided and no further violation is going to happen. A job position has been posted on JobsDB.com today to hire an internal auditor who will ensure internal compliance of the operation. I wish to emphasise that DigitalRev Online Store does not deal with used or refurbished products, and we value the trust our customers have placed in us. We sincerely apologise to you for what has happened this time. Going forward we’ll also make sure that the third party companies we deal with abide the same high standard we set for ourselves.

Last but not least, I wish to again apologise to you for the inconvenience we have caused you. And more importantly I wish to thank you for helping us becoming a better company in the process. You said that you wish to see DigitalRev goes strength to strength, and we truly appreciate your support. Instead of discrediting us, you are genuinely interested in helping us becoming a better company – for that we are very grateful.