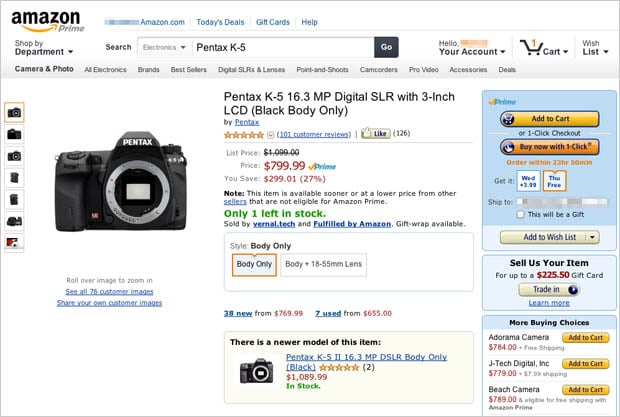 This is a cautionary tale about a recent experience with Amazon. For Christmas I was the lucky recipient of a Pentax K-5 — a gift from a family member who bought it from my Amazon wish list (Yeah me!). Unfortunately, unwrapping was the last happy moment in this tale.

As soon as I opened the box I suspected that someone had preceded me. I can’t tell you what made me think that, but there was something not right.

I quickly attached a lens and took a single picture, which I then uploaded to CameraShutterCount. The result? My “new” camera had been used 2244 times already: 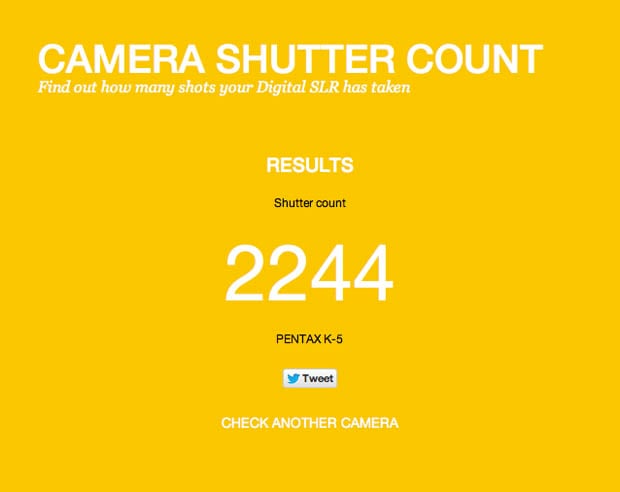 Final confirmation came when I checked the settings — the time was correct and set for “Chicago” (Central Time) for “Home” and “Travel” zones and some of the custom settings were different from the factory defaults.

Knowing that accidents happen, I contacted Beach Camera. The camera had been ordered and fulfilled by Amazon, but had actually been sold by Beach (at least according to the invoice).

After I explained the situation, Beach asked for the order number/invoice number. I gave them every number on my invoice, and they then declared that the camera had not come from them but from Amazon, and that I would need to talk to Amazon.

Off I went to the Amazon website, where I entered my information and requested an immediate call. Seconds later my phone rang. That would be the last good interaction with Amazon.

The Amazon representative insisted that the issue was with Beach, and after 25 minutes she connected me directly with Beach to work it out with them.

20 more minutes with Beach and more denials. I will say that Beach was pretty convincing. The representative described what one of their invoices should look like and what I had was not even close. Unless they are running a very sophisticated scam, they were telling the truth.

Back I went to the Amazon website to again ask for an immediate call.

The second Amazon representative said that while Amazon had fulfilled the order, it was from Beach stock and not Amazon stock. Despite that, she was attempting to make things right. Unfortunately her options were limited.

The easy fix would have been for Amazon to send me a new camera and for me to send back the “used” one. Not an option. I could return the camera and Amazon would issue me a gift certificate for the purchase price ($749). I could then order a new — really new this time — camera from Amazon.

The only problem was that the only seller who sold a K-5 for $749 was… Beach Camera. I asked if they could guarantee that I would get a new K-5 and not just the same used one again and she admitted she could not. The next closest price was from Adorama for $799. The price from Amazon itself was $950.

After much discussion/yelling/time on hold she offered this: $850 in “credit” for a camera from a non-Amazon retailer or $900 for Amazon itself. What she couldn’t do was offer me the full Amazon price or a one for one swap.

In hindsight I should have taken the $850 and rolled my dice with Adorama, but there was also the time factor. It was going to take a week+ for the return/reorder sequence and I was going to see the giver of the gift in 4 days. The last thing I wanted was for the giver to know any of this. Who wants to find out that instead of being very very generous you got ripped off and gave used goods?

After another stint on hold, the representative came back with a final offer: keep the “used” camera and Amazon would refund half the price as a gift certificate. It was a generous offer that solved my time problem and made getting a used camera a little better. I would have preferred a one for one swap but this was the next best thing and I was already thinking about what lens I could buy.

After almost 2 1/2 hours and three calls we had managed to split the baby and while not happy, I was not angry anymore. A few minutes after hanging up I received this email: A week passed and I had not received any email with any code, so I called to find out the status of my refund. Instead of getting a status I was told that no refund would be coming. In accordance with Amazon policy, my only option was to return the item for a credit of the purchase price of $749.

The previous offer was made in error and the representative would be disciplined.

To make matters worse, no one, not even Beach, sold a K-5 for $749 any more, so I would have to make up any difference.

At this point I was boiling mad and yelling to the point of my daughter leaving the room. After multiple times on hold I was told return and credit was my only option.

Let me say that I have been an Amazon customer since 1999 and have spent thousands of dollars with them. My wife (customer since 2000), daughter (2011) and I are all Prime members and as soon as my son turns 18 he will be too.

I probably buy 80-90% of all non-food items from Amazon and give Amazon gift cards to family/friends who don’t maintain Amazon wish lists. Amazon knows me so well that I actually appreciate the emails telling me about items I might be interested in buying because I probably end up buying one of those items at least once a month. The little box really does bring a big smile for me.

Thus, it would be an understatement to say I felt betrayed.

More yelling and another trip to hold. When the representative returned I was offered the same 50% credit I had originally called to check on. Now that offer was no longer against policy and I am assuming the previous representative no longer faced discipline but I no longer trusted anything I was hearing.

After making the representative repeat the offer, I asked when I would receive the credit and I was assured it would happen now.

Back on hold. After an extended wait the representative came back and explained that instead of a gift card/code they could apply $275 to my credit card and $100 to my account which could only be used on items sold by Amazon. After again being told that Amazon refused to replace my “used but sold as new” camera with a “really new” camera, I reluctantly accepted the offer. 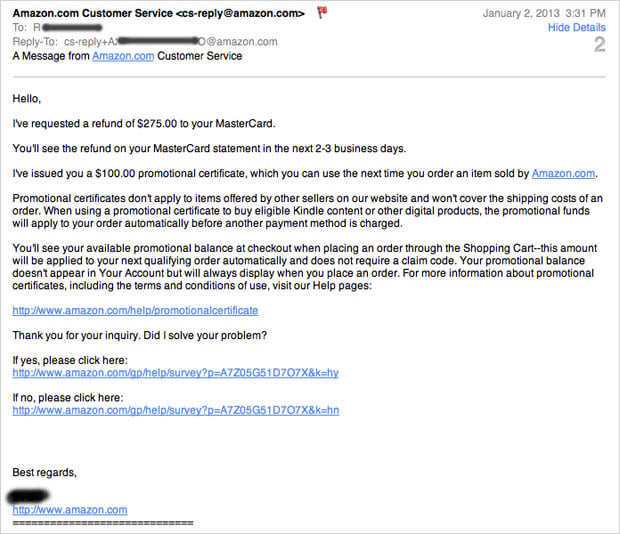 So now I will wait to see if my credit card really does get credited. I have no way of verifying the $100 credit to my Amazon account without purchasing something from Amazon and not a third-party selling on Amazon’s site. For some reason the representative could not understand why I did not trust that the credit is there.

I won’t say that Amazon has lost me as a customer but they have already lost some business. Two days after my initial conversation with them, I braved after-Christmas sale crowds at Best Buy to pick up Journey Collectors Edition (PS3 game) and a Logitech PlayStation 3 Driving Force GT Racing Wheel rather than buy them from Amazon.

Call it reverse “Showrooming” because I did all the research on Amazon but spent my $150 at a brick and mortar store.

Now I will likely apply the $275 toward an Alien Bees 400, and I won’t be ordering anything from Beach Camera either. They might not have been entirely responsible for this, but if you read the reviews for them shipping a used camera would not be out of character for them. Fool me once.

My lessons from this? First, don’t assume that just because you bought something from Amazon they will stand behind the product. Second, whenever you buy a “new” camera, use a shutter count tool to verify that it really is new.

Editor’s note: Robert’s last name has been changed for privacy

On Traveling to Iran as an American Street Photographer