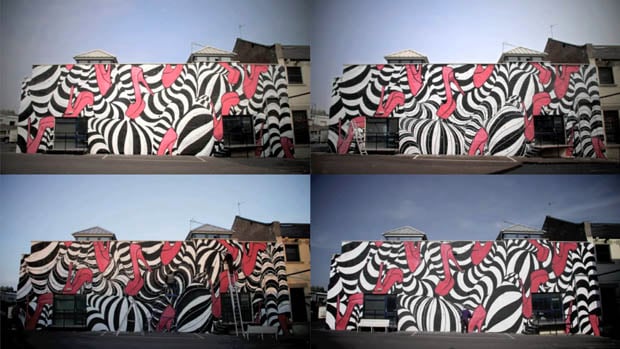 Animated GIFs are often created with a sequence of photographs, but UK-based artist INSA puts an interesting twist on the concept by mixing the concept with graffiti and time-lapsing. For his GIF-iti projects, he paints large-scale street art pieces on various walls and surfaces (e.g. the side of a truck) over a number of days. Once each version of the piece is complete, it’s saved as a photographed with a camera fixed in a certain location.

After the series of graffiti pieces is completed, the photographs are strung together into unique animated GIFs.


Thus, a tremendous amount of effort goes into each small GIF-iti piece. The process also means that, unlike what the works may look like at first glance, they were done with good ol’ fashioned hard work rather than computer trickery.

Here’s a time-lapse video showing one of the pieces in the process of being created:

This is the animated GIF that resulted in the end:

Here’s what INSA says about how the GIFs are created:

Photoshop generally comes in at the end, when I’ve done all of the painting and photographed all of the layers. I upload and overlay all of the images and create a GIF. The process is more about the physical act of painting numerous frames, and involves a lot of mental planning, every stage of painting has to preempt the next step, and the final frame needs to lead into the first in order to create a good looping GIF. The thing I enjoy about this process of painting a GIF is that it begins where most artwork ends.

INSA says he only had a point-and-shoot camera and no tripod for some of the pieces, so he was forced to be a little creative with his photo-taking: he sometimes used masking tape to fix his camera to a lampost across the road to ensure that the composition was consistent from shot to shot.

If you’d like to hear more about this work from INSA himself, Adobe recently did a two-part interview with the artist here and here.

Image credits: Photographs by INSA/Adobe and used with permission