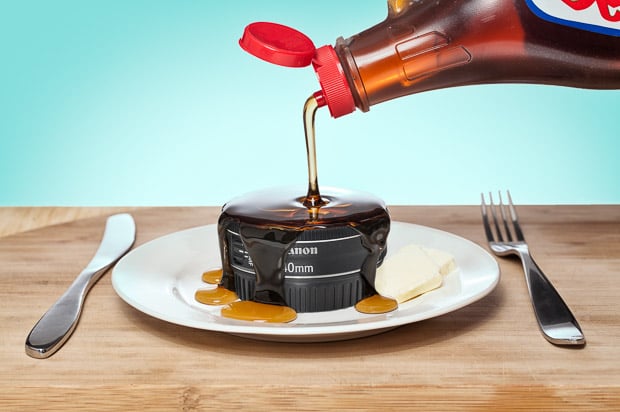 The vast majority of my photographic work is environmental portraiture, corporate and editorial photography, and interiors, some of my commercial photography does include product photos. Quite honestly, some of this stuff is pretty straightforward, take a nice representative image of the product on a clean white backdrop so it integrates onto a website (also white) seamlessly. Sometimes a client gives me a bit more artistic license, and sometimes I get to do a shoot that’s just for me. 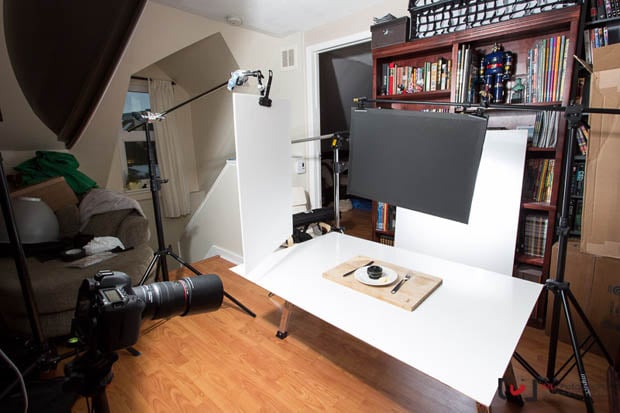 I’ve been writing lens reviews for Canon Rumors for a few months and I had been sitting on Canon’s new 40mm ƒ/2.8 “Pancake” lens since I had started. Finally, this week, I had written what I could say about my experience using it, and I also needed an image to accompany the review. I could have shot it clean, against white, like some of the others before it, but the “pancake” monicker really stuck with me so I wanted to do something special; presenting it like it was a pancake ready to be eaten.

I knew I wanted to be in the act of pouring syrup over the lens, dripping down onto the plate, what I didn’t know was if I was going to actually pour the syrup onto the lens (likely ruining it) or figure out a way to Photoshop it. The best images, in my opinion, are the ones that are done for real, but I’m not baller enough to go messing up a $200 lens for kicks, so I decided on the Photoshop method. 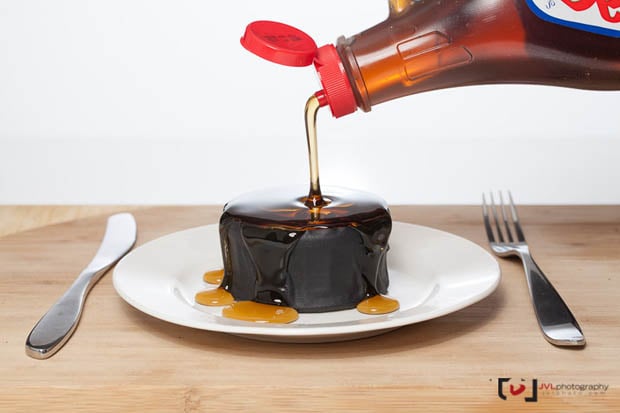 My first step was to create a “dummy” lens, of similar size and shape. I had a bunch of glass jars lying around, so I wrapped some gaffer tape along the sides to mimic the lens’ black matte paint. I didn’t want to make too many of these, so I actually practiced the positioning of the syrup into a glass before I ruined my fake lens. After making all my light adjustments for the shoot to make the syrup look right, I subbed in my jar, poured the syrup, and got the perfect look on the third shot. 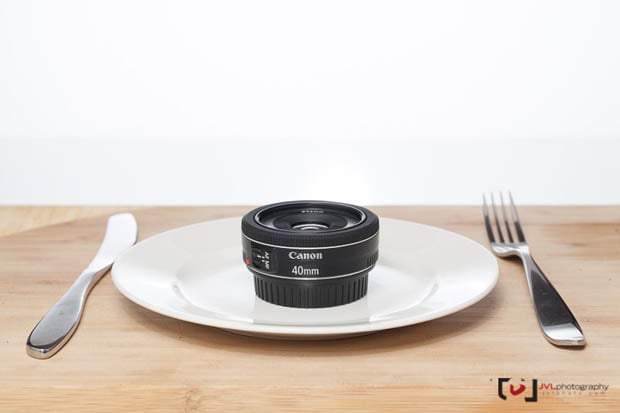 Second, I wanted a close-to-identical shot of the lens, just without the syrup, so I swapped out the plate for one with the lens. My placement wasn’t perfect here because I was working fast, but with a bit more time I would have adjusted the plate to the exact space the previous one was in (afterthought: adding some markers behind it on the cutting board would have made this more accurate and easy). No change to my settings in camera or on my lights I shot the lens too. 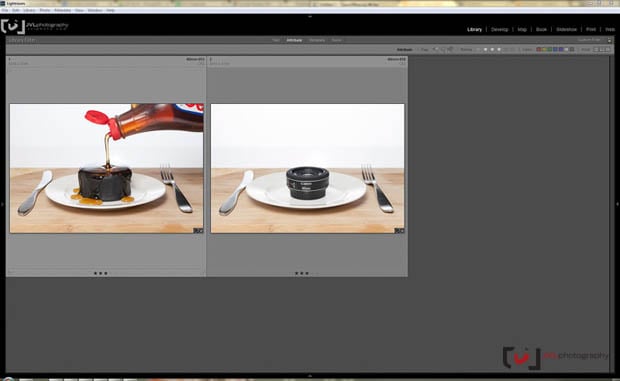 In Lightroom I made some minor highlight, white balance, and clarity adjustments. And made sure my two files were synced so the colours would blend perfectly. I then loaded the images as layers into Photoshop. 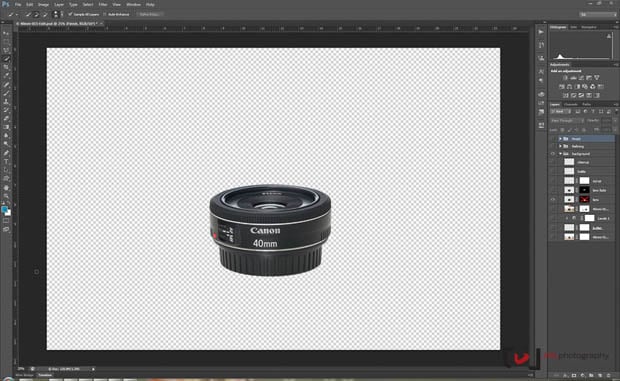 My first step was to extract the lens onto it’s own layer. While the jar and lens were a close match, they were not identical in shape, so I made a quick selection around the lens using the quick-selection tool and hit CTRL+J (CMD+J on a mac) to duplicate that selection to a new layer. I dragged that layer over the layer with the syrup and jar, then used the selection tool (while holding down CTRL/CMD) to stretch and reshape the lens so it roughly matched the size of the jar. 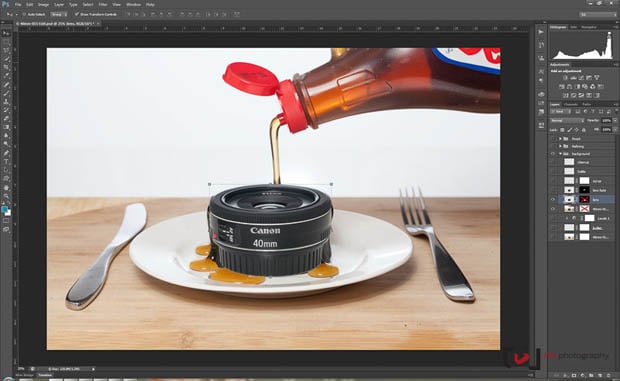 After they were aligned, I Alt + clicked the “add layer mask” icon, to hide the lens, selected a medium sized fairly soft white brush, and started to paint the lens back in where I could clearly see the black gaffer tape on the jar. Where I wanted the syrup to maintain it’s sharp detailed edge, I zoomed in closer, selected a smaller harder brush, and was more careful masking those areas. When that was done, I still needed to clean up some tape that was showing, where the rear lens cap curved in. I used my two original image layers to mask out the tape layer onto the lower plate layer (without the jar). 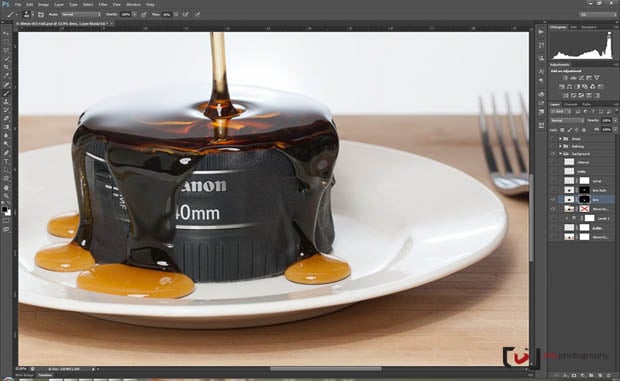 To help fill in the gaps left by this mask, I made a selection of syrup on the left side of the image, hit CTRL/CMD+J to put it on it’s own layer, then used the Puppet warp feature to re-position it inwards as if it was curving around the lens.

One important touch was to add a duplicate of the lens layer, setting it to pin light, completely masking it, and very lightly painting back in the highlights and white areas of the lens. The “C” the “AF” the “4” in “40” as well as the lens optics at the top to give it a very subtle dimension on a close inspection. 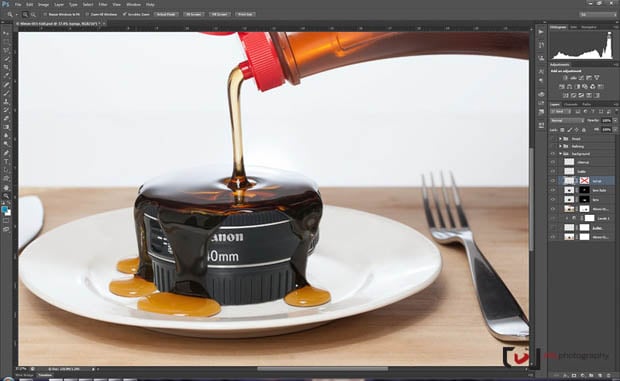 I spent some time doing regular cloning and spot correction over the whole image (on separate layers in case I messed up). When taking a look back on the image,though, it seemed uneven, like it was missing something on the right side of the lens. What goes with Pancakes? Butter! Luckily I hadn’t struck my setup, so I quickly cut some butter, put it on the plate, and shot it. Bringing the butter in on it’s own layer like I did the lens, it was a pretty simple task of masking around it back into the frame. I found it a tad bright and lacking detail, so I added a levels clipping mask above it (to just affect the butter layer) to darken it a bit.

Having finished all the detail and background work, I added all these layers to their own folder and CTRL/CMD+SHIFT+ALT+E to stamp all the visible layers together and create a new solid layer of all my edits. This would be the base for my “refinements” to further polish the image, I also used the skew tool to straighten the horizontal line in the background. 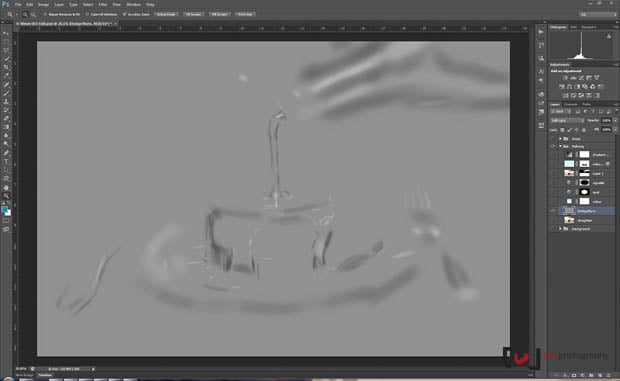 My first step was to add a 50% grey layer set to “soft light” it’s on this layer that I do all my dodging and burning. I set my dodge/burn tool to about 8% and then traced over areas that needed a bit more shadow, specifically along the edges of the syrup where it should have cast a shadow on the lens as well as brightening some of the highlights to help make the image pop and give it further dimension.

Again, looking at the image I found it was missing something – I wasn’t crazy about the plain white background, so I decided to create a duplicate layer and mask that out using a combination of the quick-selection tool, and a bit of feathering to make the transition a bit more natural. With the mask in place I was able to add a solid colour layer in-between. I chose a light pastel blue because I like the way it complimented the orange and red tones of the syrup, bottle, and cutting board. 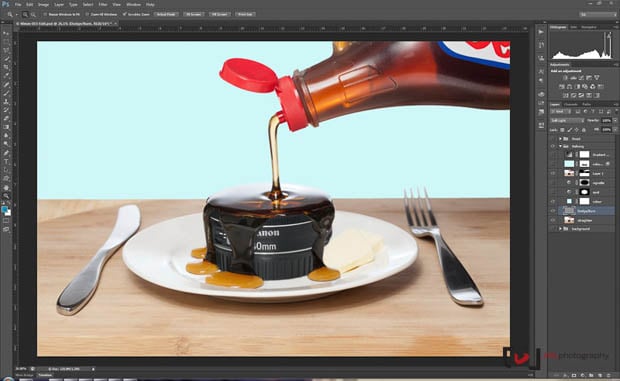 On it’s own, that background is too flat, using two level layers, I created a spotlight and vignette over just the faux background layer. With this in place, I created another solid colour layer, which I put over the masked lens layer and set the layer style to “Color”. I played around with the blend modes on it a bit, to mostly affect the highlights, which created a slight blue colour cast on the image as if the background light was reflecting on the fork, knife and plate (also, yes, I know I placed the knife and fork opposite of how it’s supposed to be set-up – thanks).

A final touch to this part was to add a low dark gradient at the bottom of the image since I found the cutting board a bit “hot” and wanted the viewers attention to stay central to the lens. 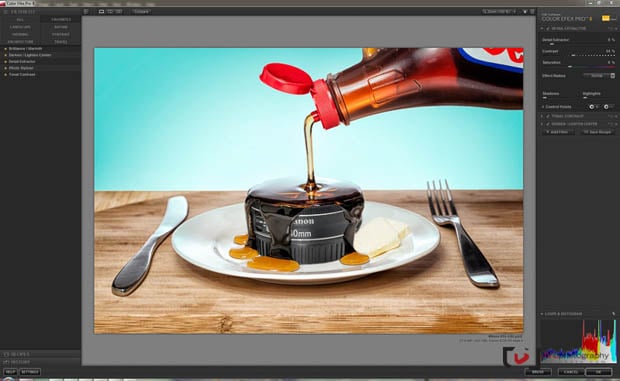 I then grouped all these layers into a folder and named it “Refining,” I hit CTRL/CMD+SHIFT+ALT+E again to stamp all the visible layers and start my finishing touches. At this point I’m mostly done, and just playing around with the look and feel.

One of my favourite ways to make an image pop is run it through my favourite filter program: Nik Software’s Color Efex Pro 4. (Note, I always save my image before opening a plugin, I’ve found Photoshop can crash here more than anywhere else). Nik allows you to stack various filters within Color Efex Pro, here I stacked Details Enhancer, Tonal Contrast, and Darken/Lighten Center. You can adjust these to taste as well as re-order them for different effects.

When I liked my results I hit “OK” and Nik created a new layer with the filters applied. I found the effects a bit strong for my final image, so I took that layer and lowered the opacity to 50%. Sometimes these effects, even when lowered, will create halo’s around light to dark transitions in your photo, so I did a combination of masking and dodging and burning again to minimize that.

My final touches included a high-pass contrast layer and a high-pass sharpen layer, both of which I’ve set up as actions, hit save and Lightroom automatically imports the file back into my catalog. 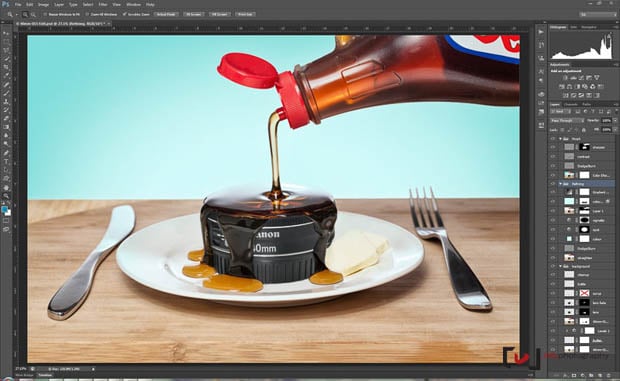 That’s it! I hope you enjoyed this tutorial, and maybe it gave you some ideas on how to pretend to mess something up without actually ruining anything valuable in the process.

You can see the final image on my review of the Canon 40mm ƒ/2.8 pancake lens on Canon Rumors and a larger version of it over on my Flickr page.

About the author: Justin Van Leeuwen is an Ottawa based Photographer specializing in commercial photography including corporate portraits and events, product photographs and interiors. Visit his website here.