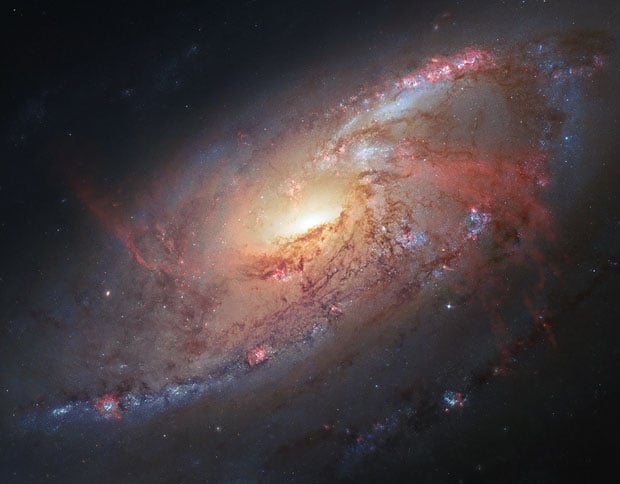 The space agencies that run the Hubble Space Telescope may have some of the most powerful photographic equipment at their disposal, but every now and then they can still use a little help from amateur astrophotographers.

Amateur astrophotographer Robert Gendler created the beautiful photograph above showing the spiral galaxy M106 by compositing existing imagery captured by the Hubble telescope with his own photos captured from Earth.

You can find a high-res version of the photograph here, and a zoomable version of it here.

Gendler started by using Hubble images to create a mosaic of the galaxy. He then used his own images and photos captured by fellow amateur astrophotog Jay GaBany to fill in the gaps (i.e. areas with little or no coverage by existing Hubble data).

The photographers’ contributions are found mainly in the spiral arms of the galaxy, since the galactic center was well documented already by Hubble’s camera. Gendler and GaBany’s images were captured from remote locations in New Mexico (away from light pollution) using 12.5-inch and 20-inch telescopes.

In case you’re wondering: Gendler is a doctor by trade, but has been involved in astrophotography for roughly two decades now.