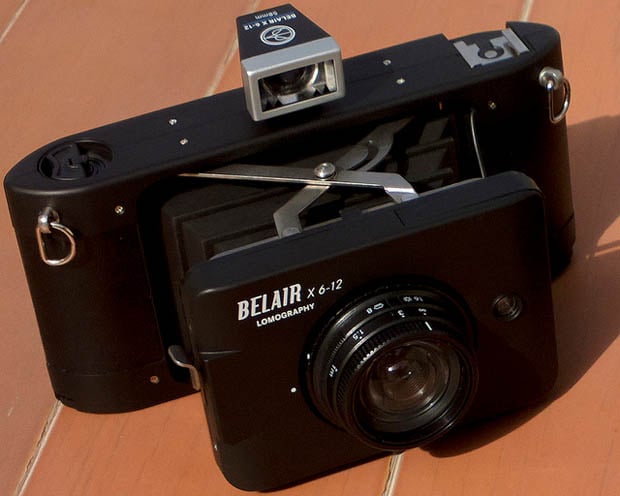 My first roll processed and scanned from my new Lomography BelAir X 6-12 puts me in the position to share some notes about the camera that you won’t find elsewhere.

The Lomography BelAir X 6-12 is a new folding medium format camera. It can take pictures in three formats: 6×6, 6×9 and 6×12. Apart from the folding mechanism, the camera is made of plastic. Even the two included wide angle lenses (wide and really wide) are plastic. Each lens comes with its own viewfinder. They are 58mm and 90mm. 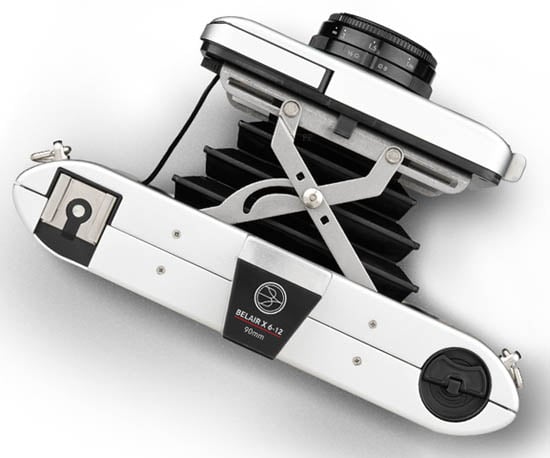 The shutter is a self-cocking design, which means that it fires each time you pull the shutter release (no separate cocking action is required). It has an auto-exposure feature that calculates an exposure up to around 31 seconds maximum based upon the average light level that it sees out of the little “eye” next to the lens. The maximum speed of the shutter is 1/125s. 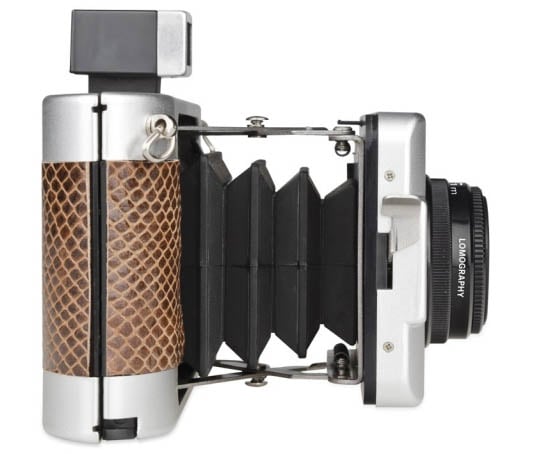 The autoexposure mechanism works by delaying the return of the shutter. There are two consequences of this. First, that 1/125 can be obtained by removing the battery. Second, that the longer shutter times are dependent upon keeping the shutter held down. If you release immediately the shutter will close the moment you release, even if the autoexposure would otherwise have given you a long shutter duration. If you think you will get a long exposure duration, keep the shutter held down until you hear the second click.

A nice trick to use — since the shutter is self-cocking and not tied to the film advance — is to simply fire a shot with the lens cap on. You will hear whether you will be getting a long shutter speed and whether you want to consider stabilising the camera before taking the actual picture. 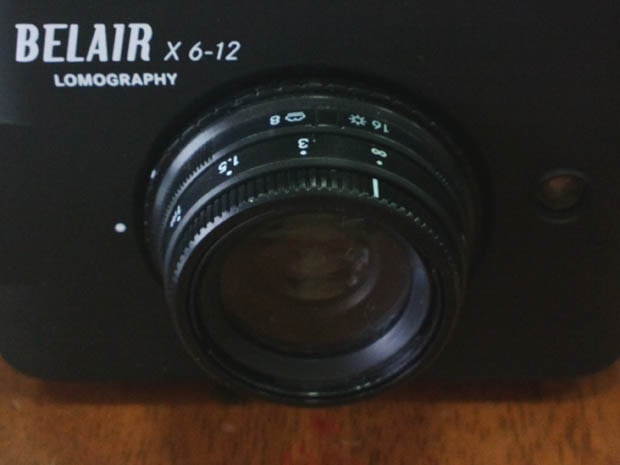 The two factors that affect the calculated exposure are the aperture set on the lens (more on this later — the choices are f/8 or f/16) and the ISO value set for the film on the small dial on the back of the lens board. Just below this is a small light that lights up to show the battery level when the shutter is half depressed. Green means good, red low, off dead. 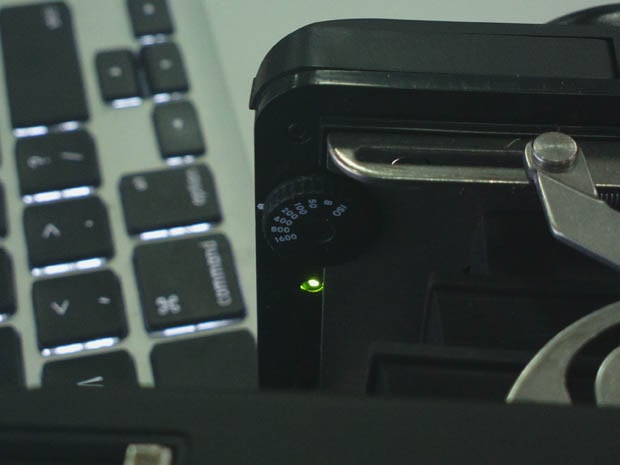 The reason for the two choices of aperture settings can be seen in this photograph of the lens set to “f/11″. The “f/8″ setting is when the two blades are swung out of the light path. When the two blades come together they form a circular opening for “f/16″. As you can see, the in-between setting gives a decidedly weird aperture shape. 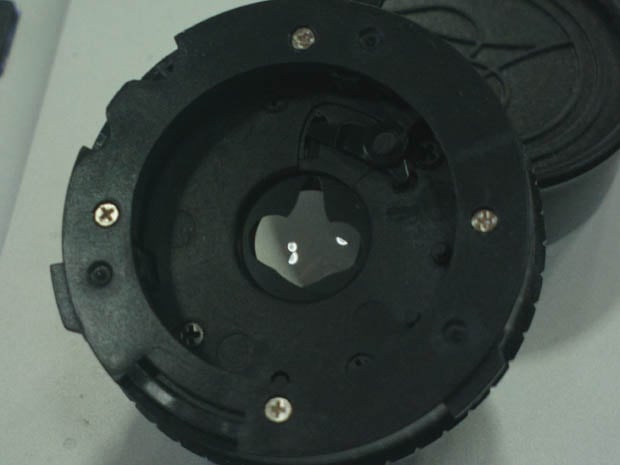 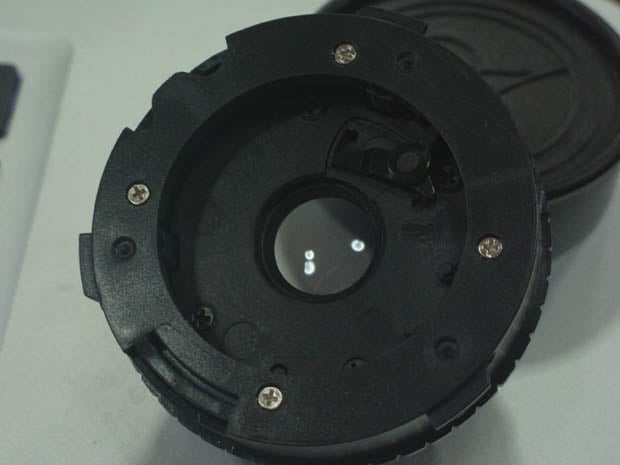 f/16 is fully closed. Also, note the little arm that moves the blades. Quite clearly, the autoexposure system can only ever know about these two states, so don’t expect any new lenses for this camera ever with anything other than f/8 and f/16 as apertures. 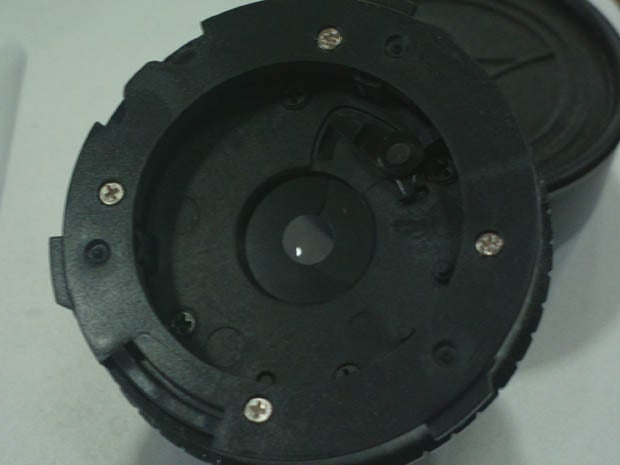 The folding mechanism of the camera locks into place once opened. It is fairly rigid considering how cheap the materials and construction are. There is a spring rivet like the one below on both the top and bottom of the frame and these need to be pressed together in order to fold the camera back up. 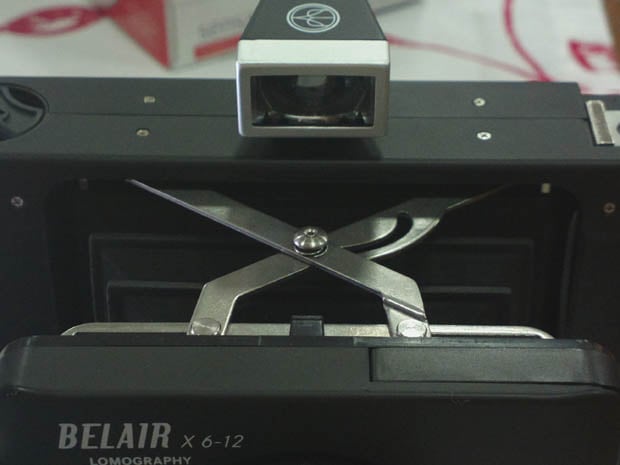 There are quite a few online reports of problems achieving infinity focus. The camera lacks a pressure plate and I think one factor may be the film bulging away from the film rails. Since there is no pressure plate the only thing holding the film flat is tension between the rolls. I decided to increase the tension by wedging some cardboard under both spools so that they are harder to turn. This helps keep the film flat as well as keeping the spools tight.

When you unload the film from a medium format camera, if the take up spool is not tight you can get a “fat roll” which is a loosely wound roll. This can cause light leakage when unloading, which ruins your frames. I have had no problems myself, but I have wedged the rolls from day one since I didn’t like how loose they were otherwise.

So far I like the camera a lot and got a decent shot already on my first roll: 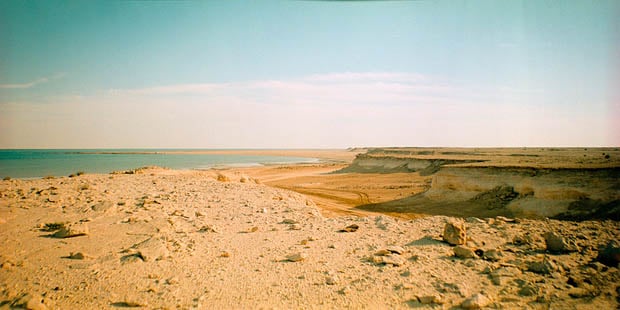 About the author: Sam Agnew is a professional photographer based in Doha, Qatar. Visit his website here. This post was originally published here.

ARGUS-IS: A 1.8 Gigapixel Drone Camera That Sees Everything and Then Some