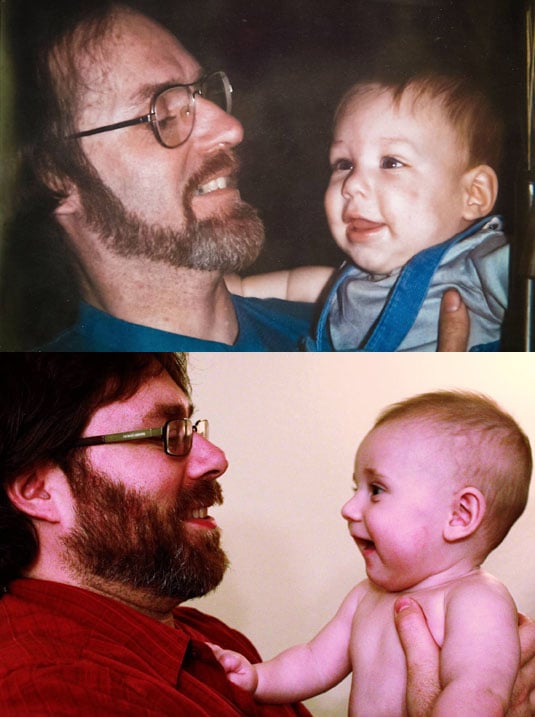 Here’s an interesting photo project idea by Matthew, who tells us that the top photo shows him being held by his father when he was 7 months old, and the bottom photo shows him holding his own 7-month-old son.

It’s a bit lengthy, but here’s what he tells us about how this concept came about:

My father Donald was born in West Virginia, the only son of his father and the only male descendant of our name in America. He moved to Detroit and married my mother Christine in 1962. Over the next dozen years, they would have 6 children. My brother is the first born, then 4 sisters, then me.

About a year and a half after I was born, my family sold their house in the Detroit suburbs and moved to Gaylord, a small town in northern Michigan. This photo of my father and myself was taken a year before we moved, probably on one of our many visits to the future site of our home. As the siblings grew up and moved away from Gaylord, my parents settled in and enjoyed their retirement there. Us siblings moved far and wide across the world, some living for a while in Amsterdam, British Columbia, Tennessee, New York, Chicago, Texas, Virginia, Georgia, San Diego, and Los Angeles (where I ended up).

My father was born into a rural life, then he lived in the city for a couple of decades, then he wanted a more rural life again. He was the type to build it himself, fix it rather than replace it, and never ask for help from anyone. After he turned 70, he started having a few seemingly minor health problems – a dental issue here, a vision problem there. It was’t until he passed out at my wedding and was rushed to a hospital by ambulance that we were truly concerned for his well-being.

It turned out that his carotid artery had serious plaque build up going far into his brain – likely inoperable. He looked into different surgeries that might have helped, but for some reason, he refused to take much if any medication. His doctors told him that his blood pressure was too high to operate, so he needed to take medication for that – he would do it for a week and then stop doing it. After the episode at my wedding, he was told to take blood thinners, or even an aspirin, daily – he started to do this and then stopped for no apparent reason.

December of 2011, I told him that my wife and I were expecting. Even though this would be his 9th grandchild, he seemed excited and happy to have another. He and my mother made plans to come to California to help out once the child was born – this would never happen.

One year ago today, at 3 a.m. on January 25, 2012, I got a panicked phone call from my mother telling me that my father had passed. It was a normal evening, he went to bed around 10 p.m. – an hour or so before my mother did, she joined him but woke up around 2:30 a.m. This is when she noticed he was cold. She called 911 and began CPR but it was too late. He died of a myocardial infarction 6 months before my son was born, he never even knew that my child was going to be a boy.

I’m sad that I never got to say goodbye or have him meet my son, but I am glad that he left this world on his own terms, in his own bed, next to his wife of 50 years, and never having to rely on anyone in his life.

I was sorting a box of photographs and saw this one of my dad holding me and smiling. It’s always been one of my favorite photos of us. When I read the date on the back and realized that my son is the same age as I was in the original, I thought it would be a good idea to take a photo for a new generation, perhaps just a simple way to connect us even after he is gone.

Hopefully Matthew’s son grows a beard, has his own son, and continues this photographic tradition when the child is 7 months old.