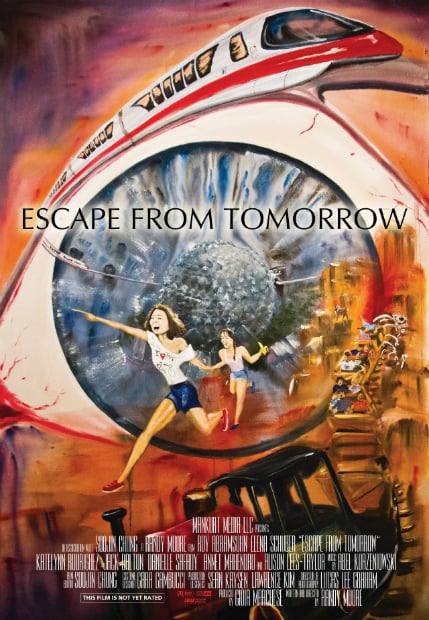 There are some places where you’re just not allowed to stage a professional photo or video shoot, and topping that list would be places like Disney World, Disneyland, and probably Apple’s headquarters in Cupertino. The thing is, some photographers and videographers have no problem ignoring the rules to get a great shot (think: rooftopping).

Writer and filmmaker Randy Moore, however, took it to another level with his upcoming movie “Escape from Tomorrow.” He somehow managed to film almost the entire thing inside both Disney World and Disneyland without getting permission… or getting caught.

The movie debuted Friday at Sundance, but filming inside both Disney parks began three years ago. And shooting right under Disney security’s nose was no picnic. Moore had to employ all sorts of secretive techniques to get the footage without raising any red flags.

Scripts couldn’t be printed out, so all info was kept on iPhones. When the crew needed to reference something, they looked like any of the other thousands of people looking down at their phones. In order to keep details from leaking, he chose to do post-production entirely in South Korea. Clearly this and the other secretive techniques he employed worked, too: neither him nor his crew was ever approached by anyone at Disney — before or after filming.

Even though it may never see commercial distribution, Escape from Tomorrow debuted to positive reviews. But the movie isn’t really what intrigues us; it’s a dark tale that follows a recently unemployed father on a trip to Disney, complete with strange visions and not so much as a peep about photography (as far as we can tell).

What intrigues us is how Moore’s movie goes to show that nowhere is truly “off-limits” in a world where you’ll soon be able to shoot photos and video using your glasses. Not that we’re encouraging or condoning secret photo shoots at Disney parks, but Moore proved beyond a reasonable doubt that it is a possibility… assuming Disney hasn’t already started training their security to spot professional camera gear.